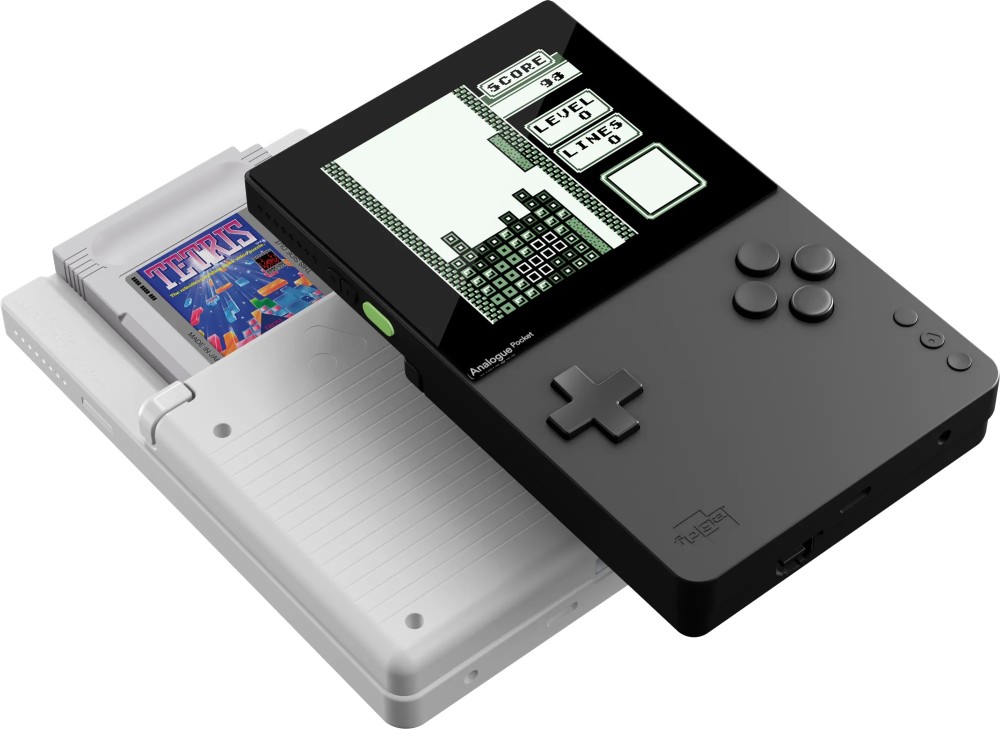 Analogue have been around since about 2012, they’re a company that specialise in re-creating classic consoles from scratch with the use of FPGAs instead of emulation. Their claim is that their machines support 100% of the console’s library (via original cartridge) with no inaccuracies, lag or other glitches – and output their display in glorious 1080p to modern TVs.

They’ve just announced their new device, which this time is going to be a handheld. The Analogue Pocket promises to combine the hardware of the Game Boy, Game Boy Color and Game Boy Advance into one neat looking portrait mode handheld.

Sporting a similar design to the RS-90 and RG300, the Analogue Pocket promises full input compatibility for GBA with the addition of 2 shoulder buttons on the back side of the unit.

I do wonder what the purpose in having 4 face buttons is, but the addition of a secondary FPGA for use by developers to program themselves goes some way to explain it – allowing some flexibility for games requiring more inputs.

If you’re wondering how they plan to scale images correctly on this 3.5″ display when the Game Boy has a resolution of 160×144 and the GBA has a resolution of 240×160, well they’ve taken the “kill a fly with a shotgun” approach and bundled an insanely high 1600×1440 resolution display in this thing. That means that Game Boy will scale exactly 10x and although the GBA can’t scale perfectly into this resolution, the super high pixel density should mean that it’ll look fantastic never the less. Alternatively they may choose to scale GBA 6x such that it occupies a 1440×960 portion of the display.

The Analogue Pocket will retail for $200 in 2020, and there will be a dock available for an as yet unannounced price that’ll allow you to play on your TV too. The unit has 2 inputs for wired controllers as well as bluetooth for your 8bitdo style controllers too.

I have no experience with Analogue products, so I can’t speak to the build quality of their past creations but I must admit the renders look beautiful. $200 is a big ask, but the offering definitely unique. I guess I’ll be $200 poorer in 2020.

On a side note, I would be interested to hear from anyone familiar with FPGA programming what the chances are that this thing will be compatible with carts such as Krikkz Everdrive X5 and the EZ-Flash Omega. Let us know in the comments.

Check out their website for more info and images.

14 thoughts on “Analogue Pocket – The Game Boy To End Them All?”