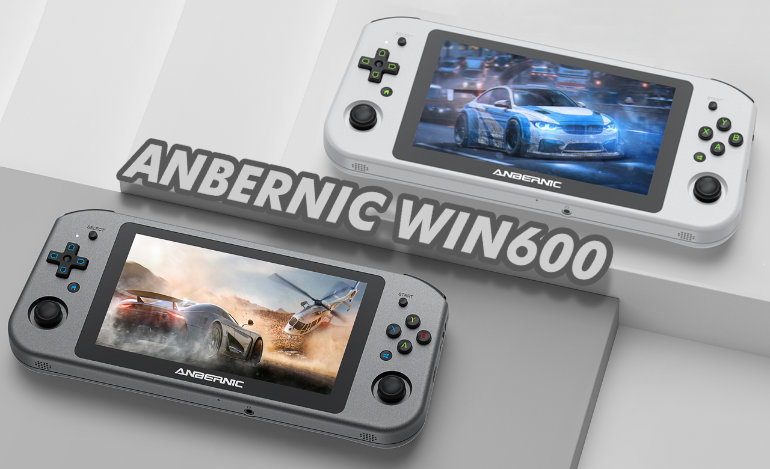 Rumours that Anbernic would be releasing their own Windows powered handheld have been rife for a while, but we now know it to be true. There is now a page devoted to the Anbernic Win600 windows handheld on their website, and we also now know its specs.

The Win600 will be Anbernic’s first foray into handhelds running Windows. They follow the footsteps of Aya, GPD and soon Ayn. The Anbernic Win600 will come in two variants, both running on AMD APUs.

Neither of these two variants are massively powerful. Compared to the quad core Zen 2 APU in the Steam Deck even the 3050e variant falls way short. However the price has not yet been revealed. They will need to significantly undercut the Steam Deck’s $400 price tag to compete.

Both models will ship with 8GB of DDR4 RAM in a single channel configuration running at 2400MHz. A nice feature of the Win600 is that the m.2 storage drive and RAM chips are socketed rather than soldered. This means that upgrades and replacements are potentially possible at a later date. Whether the device will support 3200MHz RAM remains to be seen as AMD rates these APUs for 2400MHz on their spec sheets.

Both variants of the Anbernic Win600 will also contain 6″ (just under) 16:9 720p touchscreens. This lower resolution may help running some more demanding PC titles, but 3200MHz dual channel RAM would really have helped.

It looks as though both devices will support Windows 10 and 11, and 10 will come preinstalled. The device also “supports” SteamOS. Anbernic posted a video showing the dual boot configuration yesterday. Skip to 10:14 to get straight to it.

The full specs provided by Anbernic can be found here, and in the screenshot below.

CONTROLS AND OTHER IO

The Win600 is configured with a familiar control layout on the front, with dual analog sticks, ABXY, a dpad, start and select buttons plus a Windows button and a Home button. Both analog sticks sit beneath the rest of the controls. Looking at early video reviews it seems like they might be too low down to be comfortable. It would have made more sense on this device for the left analog to be above the dpad.

The top edge of the device contains stacked shoulder buttons, something that Anbernic have only just started to do with the RG353P. Also on top are a USB-A 3.0 port, USB-C port for fast charging and a set of vents for hot air exhaust.

On the right side you’ll find a mouse/joystick mode selector switch as well as button that brings up the on screen keyboard. On the left side a volume rocker sits above the power button. The bottom edge contains only a 3.5mm headphone jack.

Those familiar with Anbernic devices may notice something amiss here. Yep, there is no external microSD storage on the Win600. A huge oversight, in my opinion.

The Anbernic Win600 Windows Handheld is due to be released at the beginning of July, and will come in two colour variants. The 3020e version will only be available in dark grey, whereas the 3050e version will also be available in white. Anbernic have yet to announce the price of either version. Personally I think there is room for lower performance Windows machines in this market, but the Steam Deck has set a precedent with price. I feel Anbernic will need really need to make this a budget device if it’s to be successful.