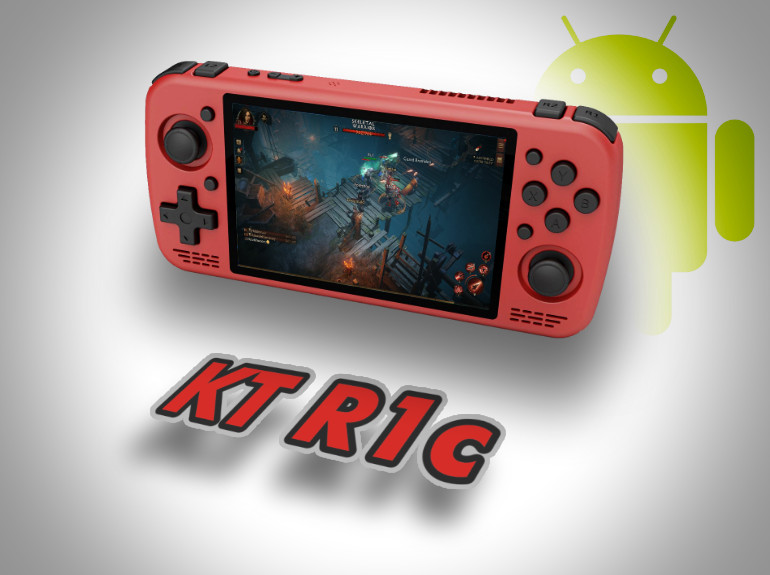 The KT R1c handheld has had a very turbulent couple of years in development, with many unforeseen obstacles and multiple hardware revisions. But things have started picking up pace in the past couple of weeks and many aspects of the KT R1c are now finalised.

This article was originally posted in 2020. It has been updated to reflect the changes made and to report on current project status.

It started back in November 2020 over on the Chinese forums. A user named niluanxy posted a long preamble about a device he was working on called the R1. Over the course of a few posts, we learned that this handheld was going to be quite different from anything available at the time. Of course November 2020 was a long time ago, and we now have the likes of the Odin, GPD XP+ and even the RG353P competing in a similar field. But the KT R1c stands alone in that it is the work of one man with a vision.

This device started life as the KT R1, and it was once planned for there to be two versions. I believe initially the plan was for a flagship R1 and a lesser powerful R1c. Over time though, focus shifted and as hardware availability changed the R1 was put on the back burner in favour of the R1c. But hardware specs of the KT R1c have changed over time as well, and the final product looks to be something completely new in the handheld world.

The KT R1c is still due to be released with multiple SKUs. Predictably, RAM and internal storage are among the variants as we often see with other devices. But interestingly, niluanxy has also spoken of a variant concerning the dpad/analog stick position. If there’s one way to stop people whinging about dpad location it is to give them the choice, I suppose!

Over its development lifespan niluanxy has settled on multiple different SoC choices for the KT R1(c), only to later discover that they were not available anymore or prohibitively expensive. Amlogic S922x was the original choice but a Unisoc T618, Snapdragon 845 and Unisoc T610 were also shortlisted at various points. Thankfully though, it looks like the brains of the device have finally been cemented. The KT R1c will (probably) be powered by a brand new SoC, the MediaTek Helio G99, aka the MT6789V.

The Helio G99 comprises 2x Arm Cortex-A76 cores up to 2.2GHz, and 6x Arm Cortex-A55 up to 2.0GHz. It’s paired with a Arm Mali-G57 MC2 GPU. This SoC is so new that currently there are no benchmarks available on GeekBench. It is pegged by MediaTek as a powerful gaming SoC, so on paper it seems like a reasonable choice. According to niluanxy, performance of this chip is better than the Unisoc T618 found in the PowKiddy X18S.

Other features such as GPS, ambient light sensor, distance sensor, electronic compass, gravity sensor, NFC, six-axis gyroscope are subject to cost at a later date. The 6GB model will apparently include all of these, whereas the lower models may only include some.

The KT R1c is set to use a 4.5 inch 1620*1080 IPS panel, with a ratio of 3:2. The perfect GBA ratio, but usually not so great for other systems. However, that ridiculously high resolution panel will do wonders for image scaling. We will have to put up with some narrow black bars in both 16:9 and 4:3 emulated systems though.

The panel has 5 point capacitive touch and a 120hz refresh rate. Niluanxy himself has stated that the screen is the same as the ones used in the BlackBerry KeyOne.

The KT R1c handheld will run Android 12 out of the box. Back in february there was a short video shown of a custom launcher in development for the KT R1c. Whether or not this will still ship with the device is not know yet.

Earlier this year Niluanxy launched a simple website with a timeline of development dating back to the beginning of 2022. Although this project has been going on way longer than that, things are finally moving at pace and much of the doubt around hardware specs has been resolved now.

The PCB design is in testing by MediaTek and the shell is also completed.

Niluanxy has purchased at least some of the processors from MediaTek already, so it does look like this device is past the point of no return now.

Pricing in China begins at around $150, presumeably for the model with 64GB storage and 3GB RAM. That price will probably translate to more like $170-$180 shipped. Obviously the models with more storage and RAM will cost much more too. Assuming this SoC rivals the likes of the Dimensity 900, 1200 and Snapdragon 845 in GPD’s and Ayn’s offerings then I think this price is OK.

The KT R1c will be launched on IndieGoGo in around a month, with shipping to follow. It’ll also be available to buy directly on his website at some point (although whether that’s the same site I linked above I don’t know).

The KT R1c handheld is the dream of one talented man working with a factory in China to get this device brought to life. Although this is his first foray into handheld manufacture, he does have a project under his belt already. The GPD Win2 aftermarket cooler was engineered and manufactured by him, and successfully funded on IndieGoGo last year.

I will always back the guy that goes it alone and tries to do something that no-one else is doing. Whilst this market is getting crowded now, the KT R1c represents more than just another gaming machine. I cannot imagine the blood, sweat and tears he must have shed to get this far, and it really looks like it’s reaching the final leg now.

On a more objective note, I think the 4.5″ screen is a great size for a device like this. I find the Odin a little too large, the RG353P way too small for Android gaming and the GPD XP+ is just insanely wide for some reason. This looks to be a nicely compact device but with a large enough screen that doesn’t waste any space in the shell. I am looking forward to seeing the benchmarks for the MT6789V.

I wish niluanxy all the best with his endeavour, and I’ll be keeping my eyes open for the IndieGoGo campaign soon.

62 thoughts on “What We Know About the KT R1c Handheld”