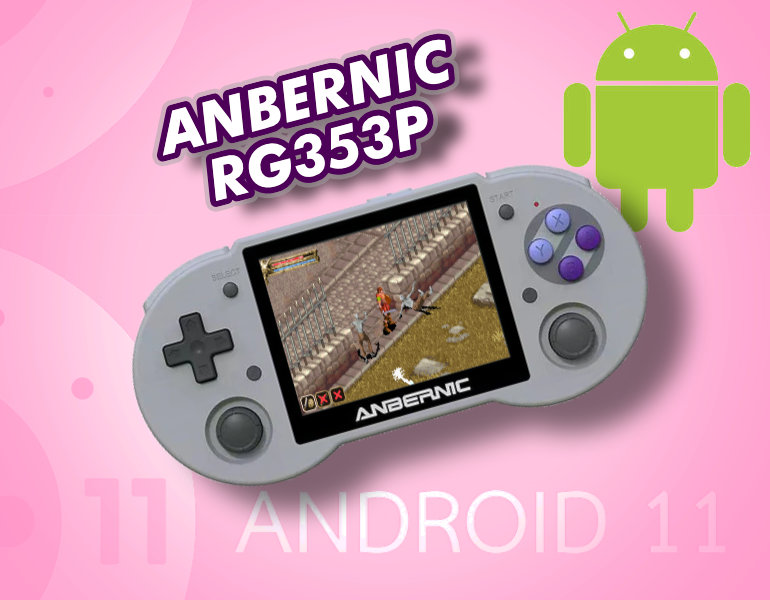 What I would give to be a fly on the wall at Anbernic’s R&D meetings. The constant crawling iteration and arbitrary hardware and design choices are quite fascinating to me. Don’t get me wrong – cynical headline aside, the Anbernic RG353P seems alright, but the mind boggles at how they arrived at this product.

First things first, the Anbernic RG353P might look familiar to you. That’s because it’s quite similar to the PocketGO S30 shell design from early 2021. Any likeness is skin deep though, and the PocketGo S30 was not an Anbernic product. In fact the Anbernic RG353P is the second successive device from the company that strays from their usual shell design, favouring instead a shell reminiscent of the SNES controller.

The device that Anbernic released prior to this was the RG503, an RK3356 based machine running Anbernic’s own Batocera build. The RG353P looks like it’ll contain this same chip, but there’s one big difference on the SoC. Whereas the RG503 only has 1GB of RAM, the RG353P has 2GB.

This means that the RG353P will be able to run Android somewhat comfortably, and indeed it does ship with a dual boot configuration with Android 11 as an option.

What confuses me about Anbernic’s two RK3566 offerings is why they gimped the handheld with the big beautiful high resolution panel. The 5″ OLED in the RG503 would have suited Android’s touch controls perfectly, but by stuffing 1GB of RAM in it they ruled that out. Now they’ve done what they should have done to begin with, but used yet another weird looking shell and a tiny 3.5″ screen!

Of course, deep down we all probably know the real reason. It’s so that their next RK3566 iteration can bring back that lovely big panel AND run Android. But then they’ll probably forget WiFi or something ridiculous. It’s hard to know how many of these decisions are purposefully made. Either they do this intentionally to extend the product lifespan of their chosen SoC and draw as much money out of buyers as possible, or they do it because they’re not thinking straight. Never attribute to malice that which can be explained by stupidity and all that, but I’m really not sure.

The front of the device has the usual gamut of controls including dual analog, ABXY, start, select and a dpad. Additionally, there is a dedicated Function button to the left, and the power button on the right side. A little too close to ABXY perhaps, hard to tell. To boot into your OS of choice, you can set the default boot option in Batocera, and override it by holding F when powering up.

The top of the RG353P contains two USB-C ports, a volume rocker, a reset button and an HDMI port. The bottom contains two MicroSD slots, two speaker grills and a headphone port. Android will reside on the internal 32GB eMMC and Batocera (presumeably) on a microSD. I guess the second MicroSD card will contain your ROMs for both systems.

The back of the device has two circular rubber pads, which I am going to guess offer very little in terms of comfort or grip.

Mercifully, it will cost less than their previous RK3566 device at $129.99 on launch. Listings have gone up on the official Anbernic Aliexpress stores and their website. Be sure to use the coupon on AliExpress to bring the price down to $129.99.

8 thoughts on “And The Latest Hardware Combination Pulled From The Hat Is Called… The Anbernic RG353P!”