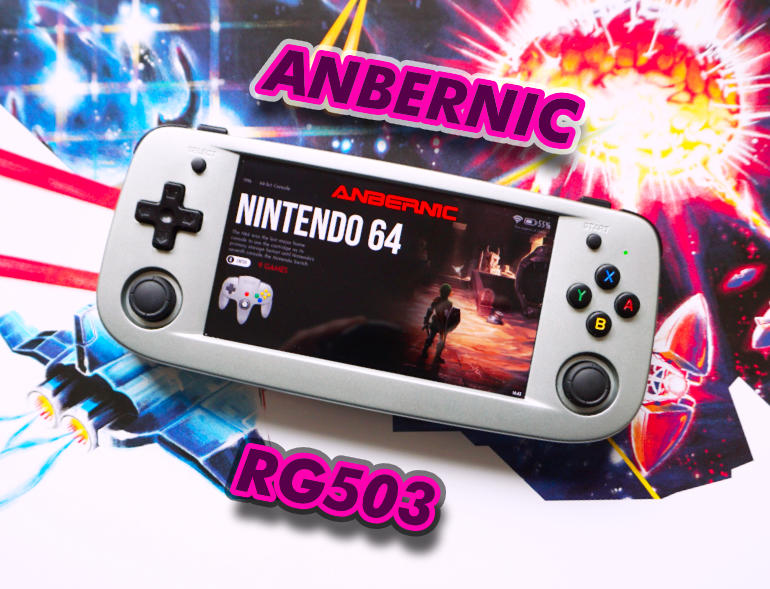 Anbernic have upended their design language to bring us the RG503. Sporting a big and vibrant 5″ OLED and a new SoC, lets take a look at what they’ve created.

Anbernic’s flagship RG552 was only released at the turn of the year, so to see another 5″ handheld released so soon is interesting. Whilst the 552 is a reasonable device, there’s no denying that it is power hungry, hot and expensive. The Anbernic RG503 however is more efficient, does not require active cooling and is also cheaper. And what’s more, it boasts the same OLED display found in the Vita PCH-1000. The folks at keepretro.com kindly sent me this unit, so let’s have a look at it.

The similarities between the RG503 and RG552 begin and end at the 5″ panel (actually the RG552 is slightly larger than 5″, and the RG503 slightly smaller).

The Anbernic RG503 is powered by a RockChip SoC previously unseen in any handheld devices. Released in late 2020, the RK3566 is a quad core Cortex A55 running at about 1.8Ghz. Coupled with a Mali G52 GPU it is a capable mid tier SoC that won’t be blowing any minds in 2022.

There are quite a few Android TV boxes on the market with this chip already, but one stark difference between those and the RG503 lies in the RAM config. The RK3566 supports up to 8GB of RAM, but at some point during development Anbernic decided that this device was not worth it. Bundled with just 1GB of memory, the RG503 is unlikely to ever run Android satisfactorily, and does not ship with Android installed.

The unit supports 5GHz WiFi networks and Bluetooth 4.2 and has a mini HDMI output on top. It charges via one of the 2 USB-C ports and OTG is supported through the other. There’s also a 3.5mm headphone jack on top.

The RG503 contains a slightly mean 3500mAh cell which from my week with the device seems to provide about 4 hours of gameplay.

By now a familiar sight, the dual analog layout is standard fair for Anbernic. The sticks themselves feel great, with a wide range of movement and an L3/R3 function when clicked. They do require some thumb athletics to use and would be way more comfortable if they were further in and higher up.

The d-pad is unmistakably Anbernic, it feels nice and is responsive. I’ve always liked Anbernic’s d-pads even if they do tend to differ every so slightly from unit to unit. The grating reported by Taki is not a problem on my d-pad. However, it was apparent on the ABXY buttons when I first started using the device.

Plastic or paint dust has accrued on the easterly side of X and A, and there was occasional quietly audible grating during the first few hours of usage. But over time this has subsided, and I don’t notice the buttons grating or grinding any more.

Four linear shoulder buttons adorn the top edge of the device in typical Anbernic style. They’re clicky and a little loud, but fine. I have quite big hands and it’s uncomfortable to press L2/R2 with the tips of my fingers, but if I lie my fingers flat across the top so they overhang the triggers I can still hit them all reliably and semi-comfortably. L2/R2 are raised slightly higher than L1/R2 which makes it easy to feel them out blind.

The bottom edge of the device houses 2 speaker grills, 2 microSD slots, a reset button and an F (function) button. This serves as the hotkey and is placed in a very awkward place for making quick saves mid game. There’s no way of reaching it without taking one thumb completely off the controls. Also, the placement is so close to reset that you need to pay attention when you do. At one point I thought some hotkey shortcuts were crashing the system to desktop, but I realised I was occasionally hitting reset by accident. Doh. I guess it’s possible to remap it, but that kinda defeats the point in having a dedicated hotkey button.

It’s big, it’s beautiful and the contrast is really good. The viewing angles are great from every extreme angle and the pixel density is good enough. The colour temperature is on the colder side, but not so much that it’s very noticeable unless you do a side by side comparison. I hate cold white light in all its forms, but this panel doesn’t really bother me in that regard.

It is bright enough, although comparisons show that it’s not as bright as some of its LCD siblings. I did notice that even with the panel at 100% brightness, when you hit the power button to put the unit to sleep the screen momentarily gets a couple of levels brighter. I wonder if with some software tweaks it would be possible to squeeze a little more brightness out of it?

With a resolution of 960*544, the panel has an awkward resolution for anything more than 2x integer scaling on most systems. That basically means a 480px vertical resolution for a lot of systems, unless you can live with non-integer scaling. To be honest non-integer scaling isn’t so bad even with this mediocre pixel density. I still have nightmares about GBA on those 320*240 displays, it’s nowhere near as bad as that. And if it bothers you, most older systems can handle bilinear filtering without taking a hit on FPS.

If you’ve got nothing nice to say, don’t say anything at all. Or so the saying goes. I have no idea what the thinking was behind this shell redesign. To me Anbernic had pretty much nailed “the look” for their handhelds. Aside from the RG300X every one of their landscape devices since the RG350 is unmistakably Anbernic.

Opinion is divided and beauty is in the eye of the beholder and all that, but I am not keen. Aside from the disadvantages of having a recessed screen (hard to clean in the corners and egdes), I am not even sure if I’m looking at a glass lens or if I’m looking directly at the bare panel. And that shell shape that kind of bulges out at the bottom, it’s just not very pretty. Their standard shell is far more attractive and no less usable. In fact the way the screen is assembled on their usual shell design, with the glass lens flush to the case, is far superior. There’s nothing wrong with the quality of the plastic or overall assembly though really. It feels solid and has a suitable heft to it without being too heavy.

The back of the unit has two additional bulges on each side where your unused fingers naturally lie. There’s a textured grip of sorts moulded into the plastic which feels nice and serves the purpose it’s there for.

The Anbernic RG503 ships with their own build of Batocera, complete with thousands ROMs onboard a secondary 64GB MicroSD card (on my unit at least). To be honest I hadn’t noticed they’d switched from EmuELEC until it was pointed out to me.

Performance of the stock OS is not great. Few emulators are configured to use the aspect ratio supplied by the core, so that’s the first thing you’re going to have to do. Saturn performance is awful and Dreamcast and N64 lacklustre out of the box.

I naively loaded Burning Rangers (a notoriously hard to emulate Saturn game) which is unsurprisingly a slideshow. However Daytona USA, Radiant Silvergun and Galactic Attack all play pretty poorly too. For some reason in Sega Rally the F hotkey doesn’t register at all so you have to reset to quit. I know Saturn is a harder to emulate system in general and maybe I’m asking too much. Maybe with some more tweaking I could eek a playable FPS out of some games, but Anbernic should have done that before they shipped it out.

Dreamcast fairs better with many games running in the high 50s. Ikaruga feels buttery smooth after dealing with Saturn and Soul Calibur runs well too.

Mario Kart 64 on N64 runs as perfectly as I’ve ever seen it, however the analog stick could do with some deadzone tweaking to feel right. RR64 stutters in the mid to high 40s with crackly audio in every core I’ve tried. Yoshi’s Island on SNES runs at a solid 60FPS with any combination of filtering and shaders that I have tried.

I think it’s fair to say that whilst the RK3566 is more powerful than the RK3326, that extra boost is not fully realised on the RG503 yet. As is often the case though, this will improve with time.

Work is ongoing to bring JELOS to the RG503. This may be released as early as next week, but we’ll just have to be patient. We can probably also expect ports of ArkOS and RetroArena to the RG503 in due time.

The RK3566 has not had these OS ported to it in the past, so the developers need time to work out the bugs and bring us a stable and full featured OS. I would expect to see much better performance in most emulators once these systems have matured.

Out of the box it’s hard to love the RG503, but it does have a promising future. There’s no denying that it’s wonderful to have that big vibrant OLED panel, and together with a gamut of mostly well executed controls the Anbernic RG503 is primed and ready. All that is lacking is a well polished OS with optimised emulators.

Going from the RK3326, the RK3566 isn’t going to add any new systems to its toolbelt. With the right support though, we can expect to iron out some of the wrinkles present in RK3326 handhelds. It’s a shame that Anbernic couldn’t demonstrate this out of the box, but we’re all used to that now.

Looks aside, I think the RG503 is going to be OK for those wanting a larger screen on an almost budget device. At around $130 shipped it is more expensive than those RK3326 systems but I think that is justified at this time in its life. The boost in power coupled with that lovely OLED panel is probably worth the extra cost for people that value those features. I do think that this performance level of handheld should be closer to the $100 mark though.

If the Anbernic RG503 tickles your pickle, it is available at all good retailers now. Acker from keepretro has provided a discount code which you can use to take $10 off the price. Simply enter rg503 at the checkout to apply it. This brings it to $129.99 shipped which is about as cheap as I’ve seen it anywhere, and $20 cheaper than the official Anbernic outlets.

Some or all of the links on this page are affiliated, which means I will receive a couple of dollars if you make a purchase from one of them. It doesn’t cost you anything more and helps to keep this site online. Thank you 🙂