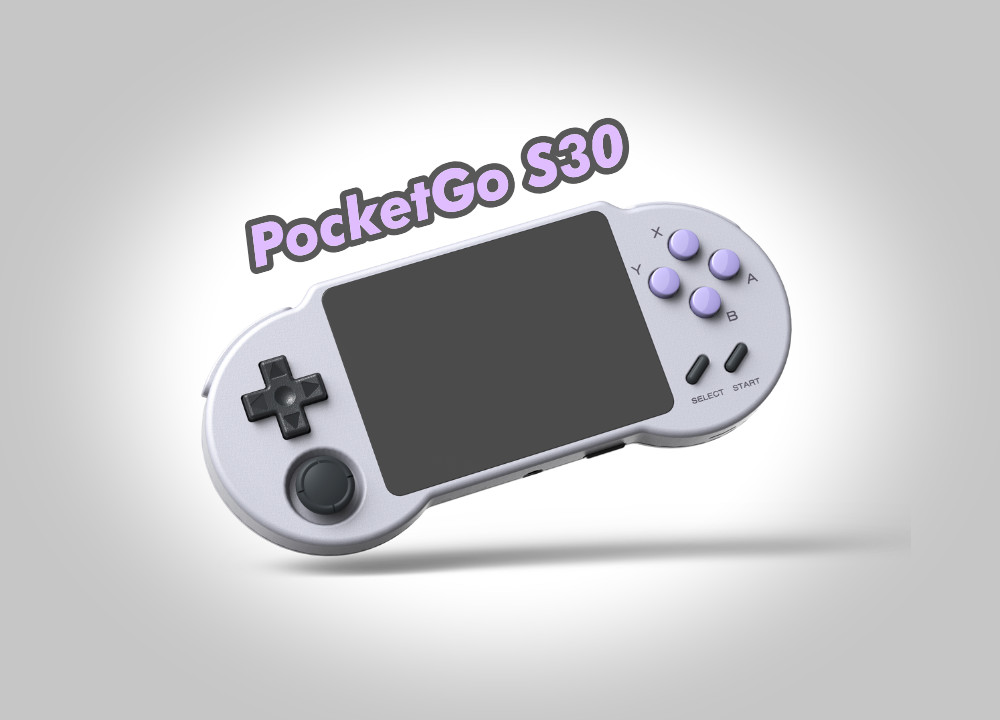 I’ve known about this handheld for a while now, but until today I hadn’t seen the final renders and videos of it in action. The specs of the PocketGo S30 are a little different to other recent handhelds too. Let’s have a look at what we know so far.

It is highly probable that the S30 will be powered by an AllWinner A33 (aka R16). The prototype units have been built with this CPU already, and it’s the same chip found in the NES Classic. The A33 is an efficient ARM Cortex-A7 chip from 2014 with four 1.2Ghz cores and a Mali400 MP2 GPU. Whilst this chip is leaps and bounds faster than the JZ4770 found in the RG350 and its kin, I believe it doesn’t perform quite as well as the RK3326 in handhelds such as the RG351P. The S30 is currently configured with 512MB of RAM.

The PocketGo S30 handheld is apparently running the same OS as the PocketGo V1, with a new front end. It’s a proprietary OS designed to be as simple to use as possible for the end user.

For anyone not keen on EmuELEC or OpenDingux, this handheld might be for you. You can easily load ROMs to the device either by sticking the SD card in to your PC, or by connecting the device with a USB cable. No special software is required to access the contents of the SD card, it can be read and written to natively in Windows. I guess this either means there’s an NTFS partition on the card, or the OS has been built with this in mind. There is also what looks to be a single settings menu which apparently unifies all settings throughout the device.

So a full specs round up:

Stacked shoulder buttons are something that people have been asking for a long while. Just like the S30 controller on which it is based, you can see that the L2/R2 buttons sit neatly underneath L1/R1.

This is a really nice design, although it does seem that the secondary buttons are a little wobbly on the prototype video. Hopefully this will be remedied before mass production.

The front of the device contains a SNES like D-Pad, ABXY and Start/Select buttons. The single analog stick on the left might raise some eyebrows, as the current trend seems to be for two. Up on top there’s a USB-C charge and data port, a digital volume rocker and a Power button. The bottom of the unit houses the microSD card, a headphone socket and what looks like three LEDs.

EMULATORS ON THE POCKETGO S30

Confirmed systems/emulators on the stock system include:

The video also shows N64, but N64 is still in testing and is currently unlikely to ship with the handheld unless performance can be improved.

IS IT A MIYOO PRODUCT?

Yes, I believe so. The Miyoo factory doesn’t have the best track record, but supposedly things have been done differently this time. The proof will be in the pudding as they say, but I am open minded. I will hopefully be getting my hands on a PocketGo S30 handheld in the next few weeks and will share my honest opinions then.

You might be aware that there are a lot of AllWinner A33 devices (not handhelds) already available with Android running on them. The manufacturer is considering the possibility of adding more RAM and giving the option to run Android too, though it will be an older version. The current configuration is 512MB RAM, but it may be possible to bump it to 2GB at an extra cost. With that in mind, would you be interested in running Android on this handheld? It would likely mean a bump in price to accommodate more RAM.

The results of this poll will probably have no effect whatsoever on what the factory actually do. It’s just for fun.

This poll is now closed, the results are as below:

The PocketGO S30 handheld is now available to pre-order for $59.99 at retromimi. This will be the 512MB RAM version with AllWinner A33 and custom Linux based OS.

I will be putting up a post about this device in the coming days, but it should be known that the software on my prototype unit still needs work. It is stable, but there are some scaling issues and performance of the later emulators leaves room for improvement.