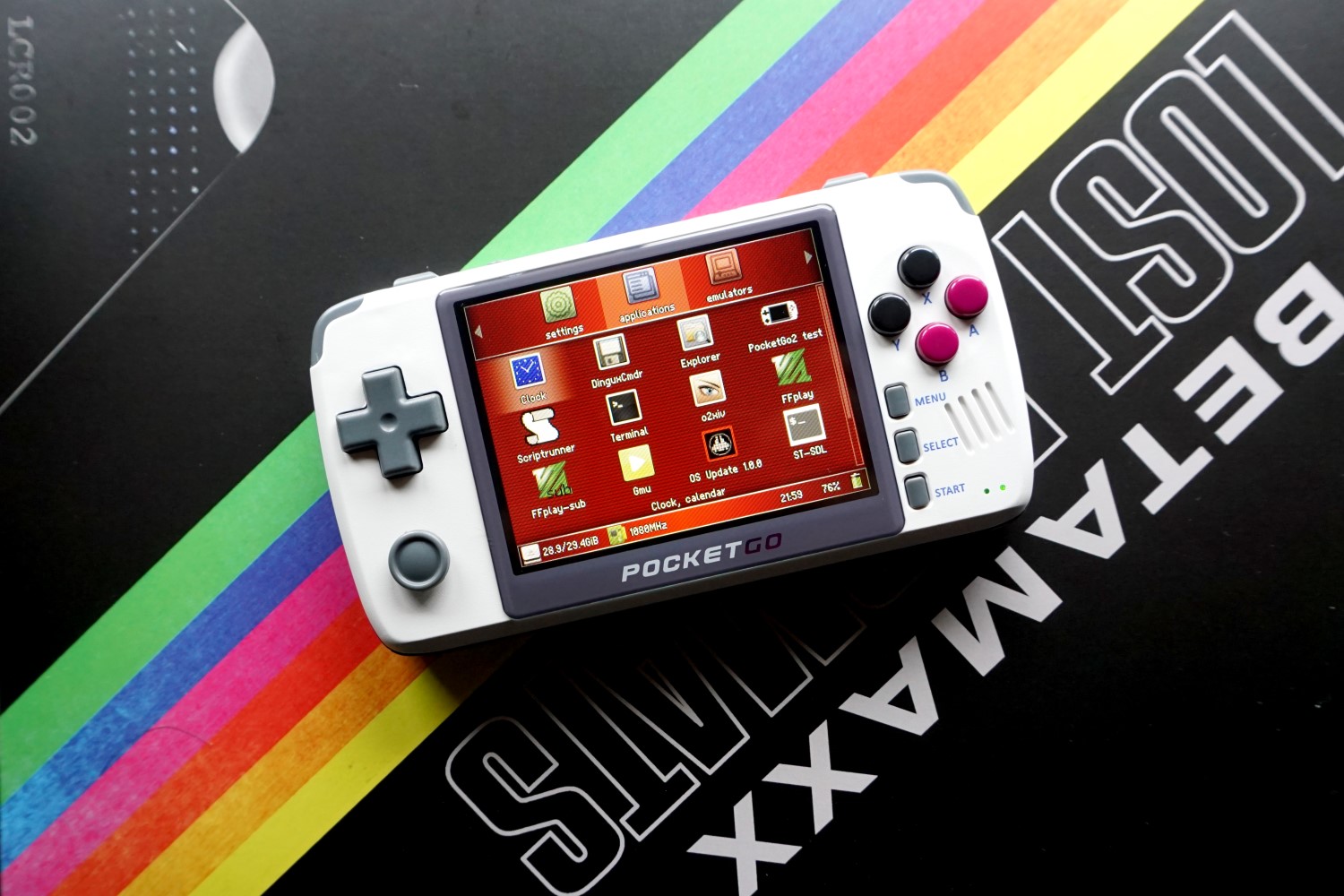 I am probably the last person on the internet to review this handheld. I was in two minds whether it was worth it at this stage. The main reason for the extreme lateness of this review are the problems I had with the d-pad and buttons. I thought that this was only an issue with the pre-production units, so I waited patiently for a replacement. Unfortunately it looks like some retail versions are affected by unresponsive buttons as well. My second replacement New PocketGo is a little better, but still not perfect. Read on for my New PocketGo Review.

The New PocketGo houses the same chip as the GCW Zero, Neo Geo X and the RG350. It’s the natural successor to the JZ4760/B handhelds from 2018 and 2019. The Neo Geo X and GCW Zero are considered old and obsolete handhelds now. It’s slightly bizarre to see this same chip creating so much hype again almost 8 years later.

The New PocketGo aims to improve over its predecessor by offering a larger screen, an analog stick, two extra shoulder buttons and a more powerful CPU. There are some other nice additions such as 2 microSD slots, both accessible from the outside of the shell. A user replaceable battery is a very nice touch as well.

Out of the box

Out of the box the New PocketGo is a good size, with the 3.5″ IPS display occupying a large vertical area on the face of the device. The unit feels well built in most areas, although I must admit that the V1 feels like a slightly higher quality handheld. The battery cover is a bad fit, on my 3 units it’s not possible to make it sit perfectly flush with the case.

On boot up you’re greeted with a colourfully skinned version of OpenDingux. This OS works fine in most cases, but it’s unlikely there will be many official updates from the BittBoy team for this OS.

For this reason there are a few developers working on replacement Operating Systems, the most popular currently being ROGUE.

Flashing ROGUE is as easy as visiting the github and downloading the latest image. Simply flash it to a slot1 microSD and away you go. The OS comes with minimal additional software, you can grab emulators and such from here. Emulators and games go into media/data/apps on the OS card, or into media/sdcard/apps if you’re using the second microSD slot for this. If you’re using the 2nd SD card on a Windows machine, simply create a directory named ‘apps’ on the card and drop your OPKs in there. The PocketGo will correctly map the directory.

If you’re concerned about losing ROMs, connect via FTP first and copy them to your PC. You can then transfer them back to the device afterwards.

There is also a port of Emulation Station in active development.

The performance is as you’d expect for another JZ4770 device. It handles a large portion of PS1 games very well, and the harder to emulate SNES games mostly run at full or close to full speed. CPS3 is where it bottoms out on the arcade front, with some games running OK but a lot being unplayable. If you’re hoping for N64, Dreamcast or anything later then you need an Android device like the GPD XD+. The upcoming Linux based Odroid-Go Advance will probably be a good bet too.

It wouldn’t be a BittBoy product without some issues. The New PocketGo has its fair share. As mentioned previously, many units seem to suffer from unreliable inputs. My pre-production model had problems with not only the d-pad but also the ABXY buttons. My replacement retail units have d-pad issues too. I’ve tried all the usual tricks such as cleaning the board contacts and membrane with isopropyl alcohol. I also tried adding a little height to the d-pad legs with tape, as others have reportedly had success that way. The result still isn’t perfect. I do find that in games I naturally tend to press the d-pad with enough force for it to function normally though. It’s mostly in the menu that a lighter touch fails to register.

Some people have had success fixing the inputs using one or both of the above methods, but others have said that the fix is temporary and over time the inputs become unreliable again. Personally I think the fault is with the membranes. Unfortunately the only replacements I have are for the GBA and they don’t fit. I will be looking for a compatible replacement to see if it does the trick.

Another issue is with the volume control. From silent, the first increment in volume takes you straight to 32 out of 100 in alsa mixer. Apparently though this is not the source of the problem, as the hardware reports only a 3% jump from 0% on the first increment. For many this is too loud and unfortunately this doesn’t seem like something that can be fixed in firmware. The solution requires soldering a ~64ohm resistor inline on the black speaker cable. Thanks to xs4all on the Discord server for these explanatory images.

You could also bodge it by applying tape to the inside of the speaker grill, but this does have a detrimental effect on the sound quality.

The analog stick is also a major gripe. It’s all very well having a slider that registers analog movements, but comparing it to the sticks on the RG350 is like comparing apples to oranges. The range of movement is smaller and it’s much harder to apply small calculated increments. The thumb stick is slippery and the entire thing spins around in its socket. On the upside it makes the handheld much easier to slide into a pocket, as the stick only protrudes a few millimetres from the shell. I would take the RG350 sticks over this though, they’re much better.

The New PocketGo does do many things right. Having 2 accessible microSD slots is a great solution. It makes adding ROMs or replacing the OS a breeze. The user replaceable battery is also a massive bonus. You can buy replacement batteries on AliExpress for a few dollars. It means you can carry around a few pre-charged if you’re going on a long trip.

The IPS display is very high quality too. Colours are super vivid and vibrant and the viewing angles are excellent. The refresh rate is correctly set at 60hz which means no screen tearing at all in any emulators. It would be nice to start seeing higher resolution screens in these things, but for most consoles 320×240 does the job OK.

If this handheld had come out a year ago and didn’t have the issues it currently has, I would probably be singing from the rooftops about it. As it stands though it’s difficult to recommend. Assuming you get a unit without any problems, it’s a very neat little handheld. It has enough grunt to keep most people happy, and at around $65 it’s quite the bargain. It certainly has some plus points over the RG350, but overall the RG350 is a superior handheld in most ways in my opinion.

If you’re in the market for a cheap and capable JZ4770 handheld with a very active community, and are willing to take a risk on the controls then the New PocketGo is a reasonable choice. If you’d prefer higher quality dual analog sticks and are willing to look past the slightly awkward d-pad placement then I would recommend the RG350 instead.

Having said that, the Odroid-Go Advance is just around the corner. It promises a lot more than either of these handhelds can offer in terms of performance.

The New PocketGo is currently available in 3 colours. The PocketGo branded version is grey and it’s available from RetroMimi. The manufacturer, Wolsen, have black and red versions branded as PlayGo on AliExpress too.

19 thoughts on “The New PocketGo Review”