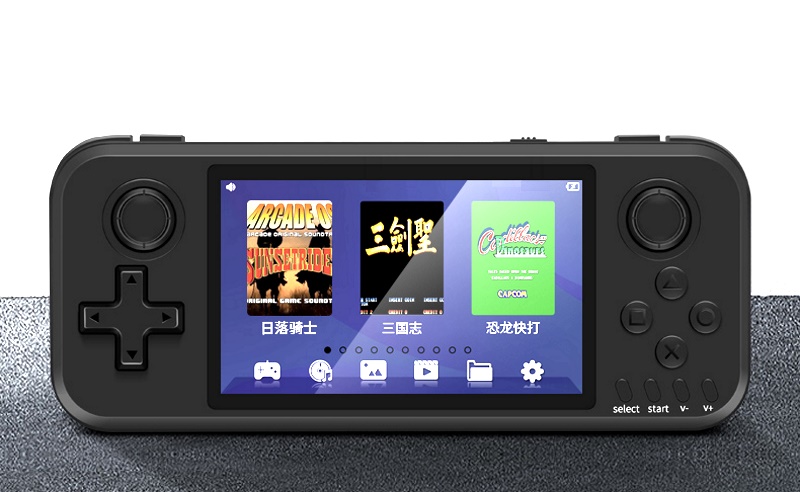 This thing popped up on Baidu in late January, and is finally available to pre-order. The Q400 is a RockChip powered handheld running on Linux.

The badly translated conversations on Baidu seem to hint that the Q400 will be powered by the RockChip RK3128. Various listings on domestic Chinese retailers state “Linux” in the product title, and according to the internet the RK3128 does have good Linux support so perhaps this is correct. The RK3128 is a 1.3GHz quad core Cortex A7 SoC and a Mali400 GPU. Whilst the SoC can accomodate up to 2GB of RAM, I’m not sure what’s on this particular configuration – it’s probably far less than that.

It’s no powerhouse by any means, having been released in 2014 as an entry level chip at the time. It should easily hold its own against the latest round of Ingenic based handhelds we’ve seen recently though.

The Q400 also claims to have an 800×480 display which is unusual for a device like this. I’m not sure it’s 5:3 aspect ratio will be much use for a lot of games though.

Current listings show this at about ¥400 which roughly equates to £44 or $57. Add $20 – $30 on to that and you’re probably in the right ball park for the price from somewhere like AliExpress.

Update: Actual price is $80 and the device is now available to pre-order from supbor.com.

Some images show 4 USB ports along the bottom of the unit too. Going by some of the promo material, it looks as though it’ll support 4 gamepads for multiplayer. It even claims to have a HDMI output too.

With four shoulder buttons, dual analog sticks and a powerful enough CPU this thing could really take off if the right developers get involved. I’ll definitely be keeping my eyes open for this one if the price is right. Alongside the Odroid-Go Advance, the Q400 is the 2nd Linux based ARM handheld announced this year already. 2020 looks set to be an interesting year for obscure handhelds, and I’m glad we’re finally moving away from those ancient Ingenic chips!

As of April 30th, the Q400 is now available to pre-order from supbor.com. Be sure to check my more recent posts for more info on this machine, it looks like it’ll be a winner.

15 thoughts on “The Q400 Is A RockChip Handheld Running Linux”