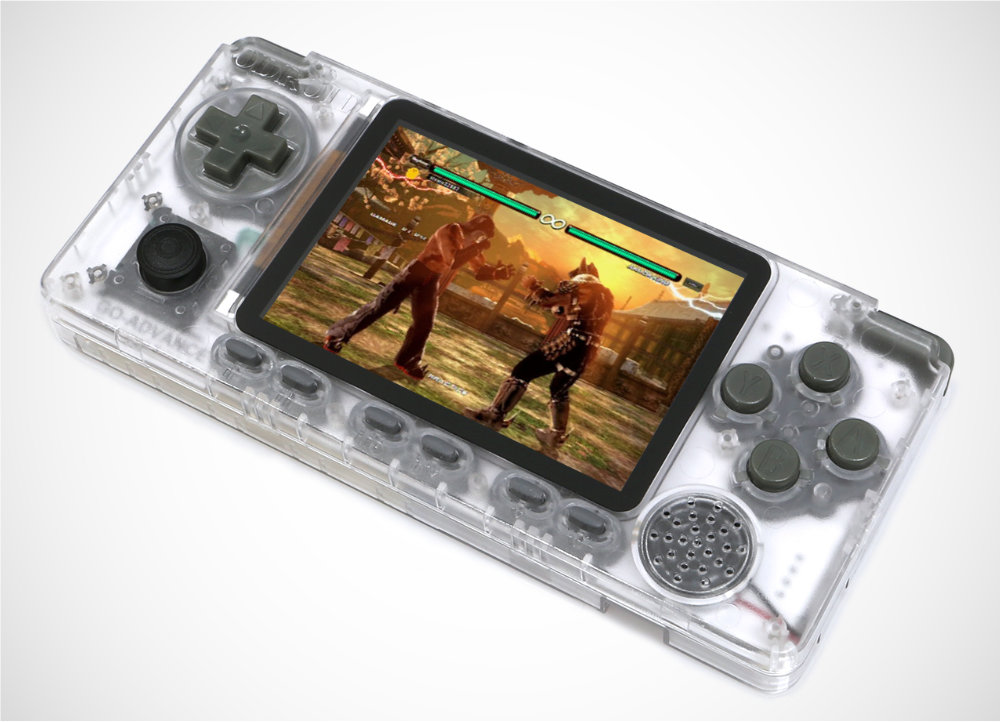 Back in 2018 they released the Odroid-Go as a celebration of their 10th year as a company. Now, two years later Hardkernel are back with the Odroid-Go Advance.

Aside from also coming in kit form, the Odroid-Go Advance shares very few similarities with their first device. HardKernel have massively ramped up the power with a RockChip RK3326, a SoC with four 1.3GHz cores and 1GB of RAM. They’ve also added a couple of shoulder buttons and an analog stick, as well as six buttons underneath the LCD. The Odroid-Go Advance promises much better emulator performance than their previous machine, and their recent video on YouTube even shows some PSP emulation. (2:16 onwards).

The device runs Ubuntu 18.04 with kernel version 4.4.189 and the EmulationStation front end. The 10pin GPIO is present just as it was on the original Odroid-Go, and there’s also a UART port on the right hand side. It looks as though you’ll need to solder your own connector if you want to use it though.

The screen is a 3.5″ 480×320 TFT panel, which is slightly disappointing. Not all TFT panels are made equal though, and developers are saying that the LCD is actually very good.

It would also have been nice to see 4 shoulder buttons and another analog stick, but make no mistake – this is a groundbreaking handheld. The RK3326 will offer vastly superior performance compared to the latest round of Chinese handhelds, and with PSP emulation already on the list the mind boggles at what else might be possible. In fact latest videos demo some N64 games running at full speed. What else? Dreamcast, perhaps?

The most suprising thing about the release of the Odroid-Go Advance is the price. At just $55 before shipping it sits comfortably within the usual price for a device like this.

The Advance is DIY kit just like its older brother, but that shouldn’t put anybody off. Putting together the original Odroid-Go was child’s play and looking at the parts list this thing looks just as easy.

The Odroid-Go Advance will be available next month from the HardKernel shop. You better believe I’ll be first in line to get one.

27 thoughts on “HardKernel Are Back With The Odroid-Go Advance”