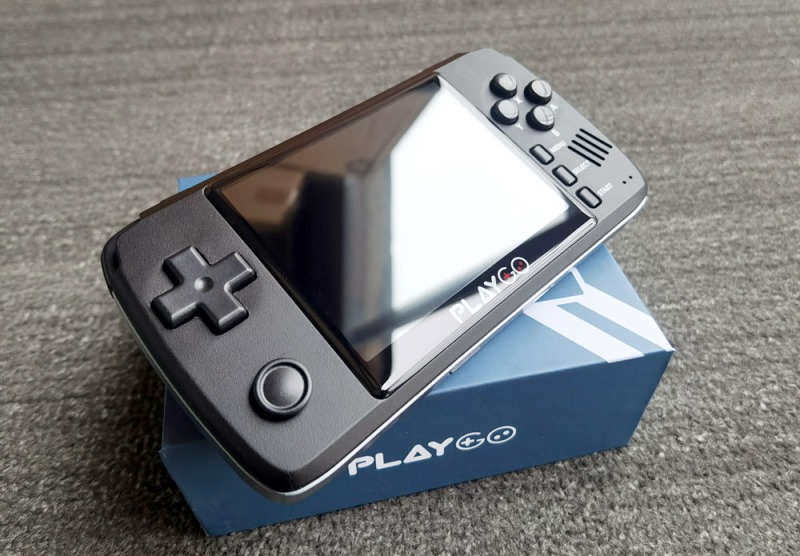 Whilst the New PocketGo V2 is now shipping from RetroMimi, it’s currently only available in the grey colour scheme. If black is more your thing, you might be interested in the PlayGo branded version from AliExpress instead.

The hardware powering these devices is identical, so you can expect the same performance from each. In Taki’s video he shows some extra screw mounts on the PlayGo, and the retail PocketGo V2 will also have these.

I’ve had a non-retail PocketGo V2 for a couple of weeks now, and I’ve been reluctant to review it due to this. My prototype unit had issues due to the lack of extra mounts. The non-retail units only have 2 visible screws and 2 under the battery door.

Thankfully RetroMimi already told me that their production units will have the extra two screw mounts. Whether they’ll also have the new LCD and board revision, I don’t know. I guess the factory would prefer to only manufacture one version, so it’s likely that the new revision will be in the retail PocketGo V2 too.

Either way, it’s not worth getting hung up on these minor revisions. The performance and stability of these versions should be identical, it’s simply a matter of preference. Personally I prefer the grey version from RetroMimi. I believe that the retail units from there will ship out with the rainbow buttons too, just like the v1.

Both versions are available right now, and alongside the RG350 they represent some of the best in Open Source handhelds. The JZ4770 is a powerful processor and we can expect to see long term support for these handhelds well in to 2020 and probably beyond.

14 thoughts on “The PlayGo Is An All Black PocketGo V2”