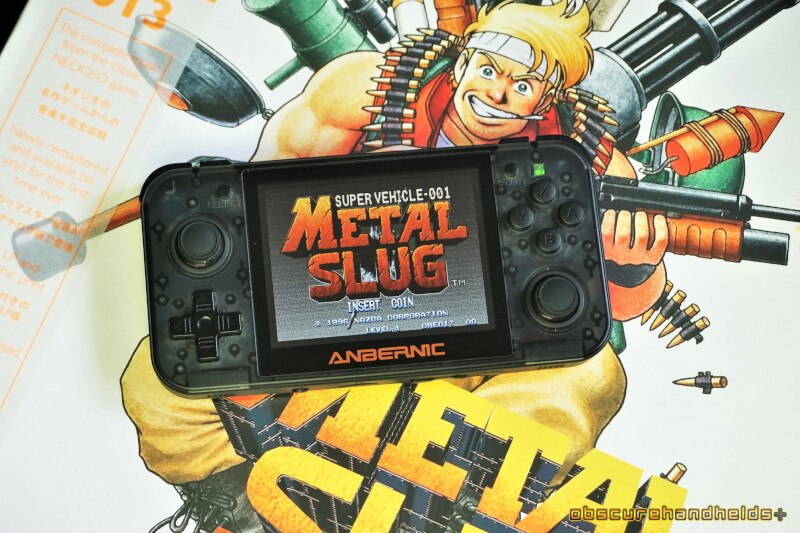 The RG350 is out in the wild and I’ve had my unit for a couple of weeks now. I reckon it’s the best open source handheld currently available for under $90. Read on for my review.

2018 and early 2019 saw a tonne of handhelds released with almost identical hardware. The Ingenic JZ4760/B Soc was powering the vast majority of them. It’s a ten year old processor that offered reasonable emulation performance for most consoles up to and including the SNES. It’s easy to forget that in 2013 we already had a natural successor for this CPU in the GCW Zero. The GCW Zero’s JZ4770 CPU offered superior SNES emulation and allowed for a wide library of PS1 games to be played at full speed. The GCW Zero became mostly unavailable to buy soon after, and we saw shift towards ARM powered Android handhelds instead.

With the release of the RG350 we’re seeing a renaissance of the JZ4770. Whilst the RG350 is a real progression from the majority of recent machines, it is still running a middle-of-the-road MIPS processor from 2011. As such, if you’re expecting a console capable of N64, Dreamcast, GameCube or PS2 emulation then Android handhelds are still your goto devices. On the other hand if you’re into older consoles and Linux is your thing then the RG350 might be exactly what you want.

The RG350 is a collaboration between the manufacturers of the RS-97 and Tony Jih, who is a Chinese software and hardware developer that has voluntarily worked on firmware for many of the other recent handhelds. Without further ado, let’s take a look at the machine and see what it’s all about.

The RG350 is currently available in three colours. I opted for the smokey transparent grey as I’m a fan of transparent shells.

Aside from the bump in performance compared to its rivals, the RG350 promises a few other nice additions which help set it apart from the competition. As well as the d-pad, the RG350 boasts two real analogue sticks. These are very different to the nubs found on the RS-97 Anniversary Edition, LDK Landscape and the GCW Zero as they offer full 3D movement rather than sliding laterally over a flat surface.

The unit features 4 shoulder buttons, 2 sets of USB-C ports, a HDMI output, a reset button, headphone output, volume rocker, and an external microSD slot. The RG350 also has a pair of stereo speakers and rumble motors, which is a first for a device like this.

At this point many of these handhelds rival products from mainstream console manufacturers in terms of build quality. I’m happy to say that the RG350 is one of them. That’s not to say that the controls are perfect (we’ll get to that) but as far as the manufacture and assembly of the RG350 goes there is little to find fault with. The unit feels premium in almost all aspects, with some notable mentions going to the beautifully executed shoulder buttons and analogue sticks.

The device comes equipped with enough buttons to service every console it’s capable of emulating. The addition of a volume rocker (instead of a wheel) and accessible reset button are welcome ones too.

I have two gripes with the controls – the first one obviously being the placement of the d-pad. We all knew that this might be an issue, and for me it unfortunately is. I have big hands and I would find the d-pad more comfortable if they switched it with the left analogue. I find myself having to have a very loose grip on the left side of the console with my thumb fully extended in order to use the d-pad without getting cramp.

Secondly, the ABXY and d-pad protrude slightly too far out of the case. Although the RG350 has the exact same d-pad as the RG300, the RG350 d-pad protrudes from the shell around an extra millimetre. It’s not much, but it means that sliding your thumb over it is not as fluid as it could be. The same can be said for the ABXY buttons, they’re too tall and could do with being recessed by 1 or 2 millimetres in my opinion.

The analogue sticks are the best we’ve ever seen on a device like this. They’re similar to the ones found on the GPD G5A but smaller. They have a textured rubberised finish on top and a small lip around the very edge to provide extra grip. They also function as L3/R3 when pushed down and in my opinion they are perfect. The OS comes with a homebrew app to test the function of all buttons on the device and the analogue sticks are registering exactly as I would expect.

The shoulder buttons are also very well put together with L1/R1 curving around the edge of the shell and L2/R2 set just next to them on the inside. They register with a very soft click and are easily reachable whether you’re using the d-pad or the analogue sticks.

The RG350 houses a 4:3 320×240 IPS display at 3.5″ in size. The colours and the viewing angles are excellent in every orientation, only beginning to fade and invert when viewed from extreme diagonal angles. It’s a shame that the panel isn’t higher resolution, the pixels are easy to see on a screen this size and consoles such as GBA really suffer with the non-integer scaling required to fill the screen horizontally.

I understand that it’s difficult to accommodate all consoles when choosing an LCD but it would have been amazing to see a super high resolution panel such as the one used in the upcoming Analogue Pocket, where sheer pixel density would overcome many of the scaling issues. But this adds extra cost, and the console is already pushing the boundaries of affordability for many so I understand their choice. The LCD operates at 60hz and looks beautiful, with vivid, vibrant colours and no screen tearing to speak of.

Whilst there’s no app or dedicated button for screen brightness, you can adjust it using the Power + Vol button combination.

As of writing the current firmware is RG-350_BASE_v1.4_121019. This is newer than the version that shipped with my unit, but mine was delivered a couple of weeks ago now. If you need the v1.4 (or newer) firmware use the link above to download it. It is possible to apply patches to bring the firmware up to date instead of re-flashing from scratch. You can do this by dumping the patch in the /media/data/apps folder and running the OS Update application.

To transfer files to the RG350 you can either remove the external SD card and stick it in your PC, or you can access the unit via something like Filezilla or WinSCP. To do this you need to plug in your device using USB2, load the Network application and select the connection method you want to use. Then you can access the unit using the IP address and logon name given in the Network application.

Depending on how many updates you need to add it may be simpler to just flash the entire new OS image from scratch. This is what I did and it requires you to disassemble the device to get at the internal SD card. Instead of wiping my internal SD and flashing the new image, I decided to use a new SD card. This means that if I’d messed it up somehow, I could still use the other card with the original firmware on it whilst I figured out the problem. Thankfully everything went according to plan following the instructions here. In my opinion Anbernic should have made both MicroSD slots accessible from the outside, it would make the re-flashing process far easier and less time consuming.

The img file linked above comes with the latest version of all emulators included, however all apps and games are included in a separate zip file. You can choose which of these you want to include by following the instructions here.

The RG350 has a 2500mah battery installed, which is 300mah larger than the one found in the GCW Zero. Battery life is ridiculously good in this thing. I’ve played a mixture of PS1 and GBA for hours at a time and the battery meter has barely dropped. I would estimate that the device has somewhere between 5 and 8 hours of battery life depending on emulator. It’s really good.

The JZ4770 offers a notable increase in performance in SNES SuperFX/FX2 games. Games such as Star Fox and Yoshi’s Island still rely heavily on frameskip, however the difference between the JZ4760B and JZ4770 is very obvious. These games on the RG300 (JZ4760B) were unplayable, however on the RG350 they are enjoyable to play as long as you can live with frameskip.

Playstation emulation is also good on the RG350. I have sunk a few hours into Diablo, Ridge Racer Type 4, Tony Hawks Pro Skater 2 and Gran Turismo. Diablo stutters a little until you’re in a dungeon and then frame drops are minimal. There are probably many PS1 games that are still unplayable, but the library is opened right up on the RG350. Everything I’ve tried so far runs very well.

This is an open source handheld running OpenDingux so development is ongoing all the time. Whilst a game might only reach x FPS today, tomorrow an improvement may bump the framerate by a few FPS. A lot of the library is already fairly mature having been brought over from the GCW Zero, but this doesn’t mean there won’t be improvements.

Unfortunately not all of the advertised features are currently working. Although the rumble motors can be tested in the input test app, they’re not used in any emulators yet. I know that this is being worked on and will eventually be worked into the software.

Likewise despite the HDMI port being present, the software is not currently in place to support it. It’s unfortunate that the machine was rushed out before these features were working, but then again it gives us all something to look forward to in the coming weeks or months 🙂

The RG350 is a step forward in many ways, but it also feels like treading water in others. It’s a shame to see no advancement in CPU power since 2013’s GCW Zero, but it’s a much better device overall. It’s immediately obvious that the RG350 has been designed and built with far more thought and skill. The GCW Zero also cost nearly twice as much when it was available.

In my opinion the RG350 represents the best that we currently have coming out of China. It’s a solid effort all round with only a few drawbacks, of which some are personal preference. The design and execution is outstanding and it’s obvious that a lot of thought and attention to detail has been given to this device during research and development.

With that said, here’s my verdict in a plain and simple pros and cons list.

You can pick up the RG350 from the official Anbernic store on Aliexpress in a choice of 3 colours. It’s also available from Amazon if you pay a little more to get it faster. If you enjoyed this review and plan on treating yourself to one of these, please consider using the links below to make your purchase. It won’t cost you anything extra and I’ll get a few cents to put towards upkeep of this site. It means a lot! 🙂