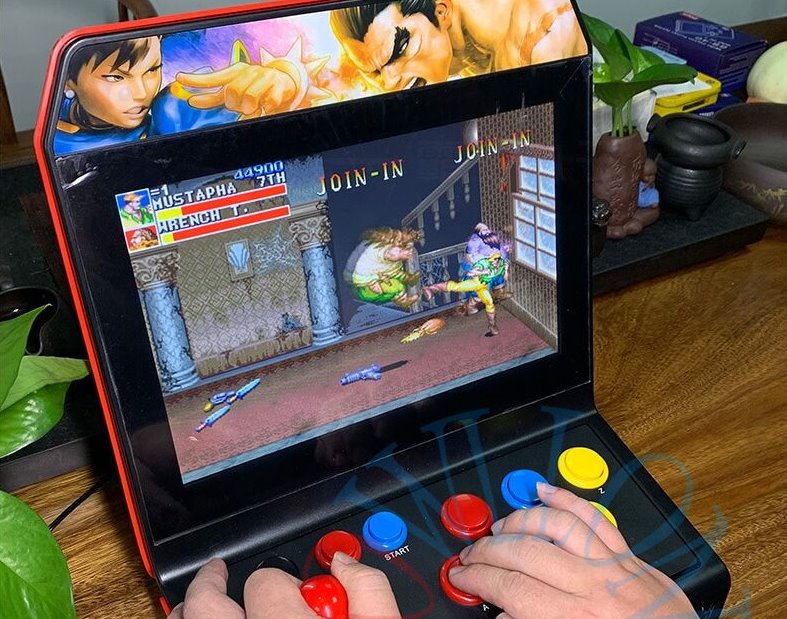 Mini arcade machines are not something I’ve covered on this site before, so let’s fix that. The first versions have been around for a couple of years now, and more keep on coming. They also seem to be getting bigger! So without further ado, let’s have a look at what’s available right now.

Starting with the A7, this little 3″ arcade was the first I ever saw. It’s very cheap and for good reason, the hardware inside this is the Ingenic JZ4725B. That’s the same chip as the both Dingoo A320 and the more recent RetroMini RS-90. Unlike the RetroMini, OpenDingux was never ported to this machine so you’re stuck with the software that it ships with. This is likely because it’s using a different LCD, which adds complications when porting the OS over. According to the PowKiddy store, this version supports GBA, NES, CPS1, CPS2, SNES and Mega Drive and comes with 520 ROMs built in. You can also add your own ROMs via the microSD card slot.

Although this thing was originally called the RS-12, if you search for RS-12 now you’ll find a similar device that only plays NES titles – so don’t bother with that.

The PowKiddy A7 is still available on AliExpress for about $30 at the PowKiddy store. This would make a decent gift for a young kid to mess around with, but if you’re after something better keep reading.

Despite its similar looks, the RS-07 is a decent step up from it’s smaller brother. Mountains of these arcades can still be found by searching for either PowKiddy A8 (I think it’s the same device anyway) or RS-07. That’s probably because it’s still pretty popular – for good reason too. This arcade runs the JZ4760B – the same processor found in the majority of recent handhelds. The LDK, RG300 and RS-97 all run on this processor and it’s had a lot of development over the past couple of years.

Aside from the addition of 2 extra face buttons, the RS-07 also has a larger LCD. The 4.3″ panel in this arcade is in a widescreen 480×272 layout. Imagine the screen on an original PSP, it’s the same size as that.

The RS-07 also has 2 USB ports on the back and ships with 2 external controllers. This means you can play 2 player arcade games with your pals on this thing as well.

The best thing about the RS-07 is that it’s been officially supported by RetroFW since the end of last year. This opens up a huge amount of potential for the device and gives you way more for your money than the stock firmware. Scroll down and check the impressive list of emulators and games available.

The RS-07 is available for around $60, which is roughly what comparable handhelds with the same CPU cost.

This is where things start to get more interesting. The Aiwo G1000 runs on a RockChip RK3128 (probably) and the stock firmware installed on the device is RetroArch. There is a custom firmware available for this arcade too and it’s currently in active development. Check the video from Johnny Liu to see the state of the CFW as of late December. He has links in the description to instructional videos to get this up and running if you’re feeling brave.

The RageBee 7 / PowKiddy A9 is more or less the same device as the AIWO G1000, however it does also have a higher resolution screen. It’s still a 7″ panel but this one runs at 1024×600. It also runs RetroArch as stock, but unfortunately so far no progress has been made dumping the firmware or creating a custom image.

The RageBee 7 and PowKiddy A9 contain the same hardware as one another, but there are slight differences in the shell. I believe that the only difference between these and the AIWO G1000 is the screen and some cosmetic changes to the RetroArch UI. Honestly the G1000 is the better bet right now, solely down to the developer support that it’s currently getting. However, if you like the idea of that high res panel, the RageBee can be had for around $70 at gearbest.com

In case you weren’t confused enough with the various different names for the same hardware and slight variations between manufacturers – here you go. Our old friend JXD has also stuck their name on some 4.3″ and 7″ variants of these machines!

Before we depart, there’s a couple more arcades we need to look at. Released just a few weeks ago, the PowKiddy A10 is the biggest “mini” arcade yet. It houses a whopping 12″ display and runs something on top of Android 5.1. This is the first arcade in this list to have a real stick and buttons, which gives you some idea of the size. The device boots up to a rudimentary menu from which you can select any of the 1000 built in games. Not much else is known about this arcade yet as it’s quite new, but it’s likely to be running on a low power RockChip CPU like the previous two machines.

Wicked Gamers & Collector has done a small video review of this on YouTube which shows it in action.

The PowKiddy A10 will cost you an eye watering $200 shipped from AliExpress. Unfortunately due to the size and weight of this thing I would guess that a lot of your $200 is going towards the shipping. Still, it’s a pretty neat looking machine and I hope someone manages to get some CFW running on it.

Lastly, whilst researching these arcades I stumbled across this monstrosity from the folks at 3A Game Company. If you’re into DIY kits and arcade machines then you’ve got to have a look at this. It’s a 10″ dual screen wooden DIY arcade running on the latest Pandora’s Box 6, and it looks fantastic. The Pandora’s Box 6 is a board with an AllWinner CPU running Android, and has various I/O for hooking up to controllers and screens. They’ve developed a heavily customised front-end running on top which provides a decent UI for navigating and launching ROMs. I believe that the UI on the Super Retro Handheld is very similar, make of that what you will!

The Pandora’s Box DIY arcade will cost you an almighty $247 shipped to your door. If you’re tempted to get stuck in to a DIY project, be aware that there will be soldering and wiring required to get it set up.

There are hundreds more of these things dotted around the web, and this is just a collection of the more interesting ones. If you’re tempted to grab yourself one and have questions about how to get CFW running, head on over to our discord server where you should find some answers!

8 thoughts on “The Mini Arcade Machines Are Getting Bigger!”