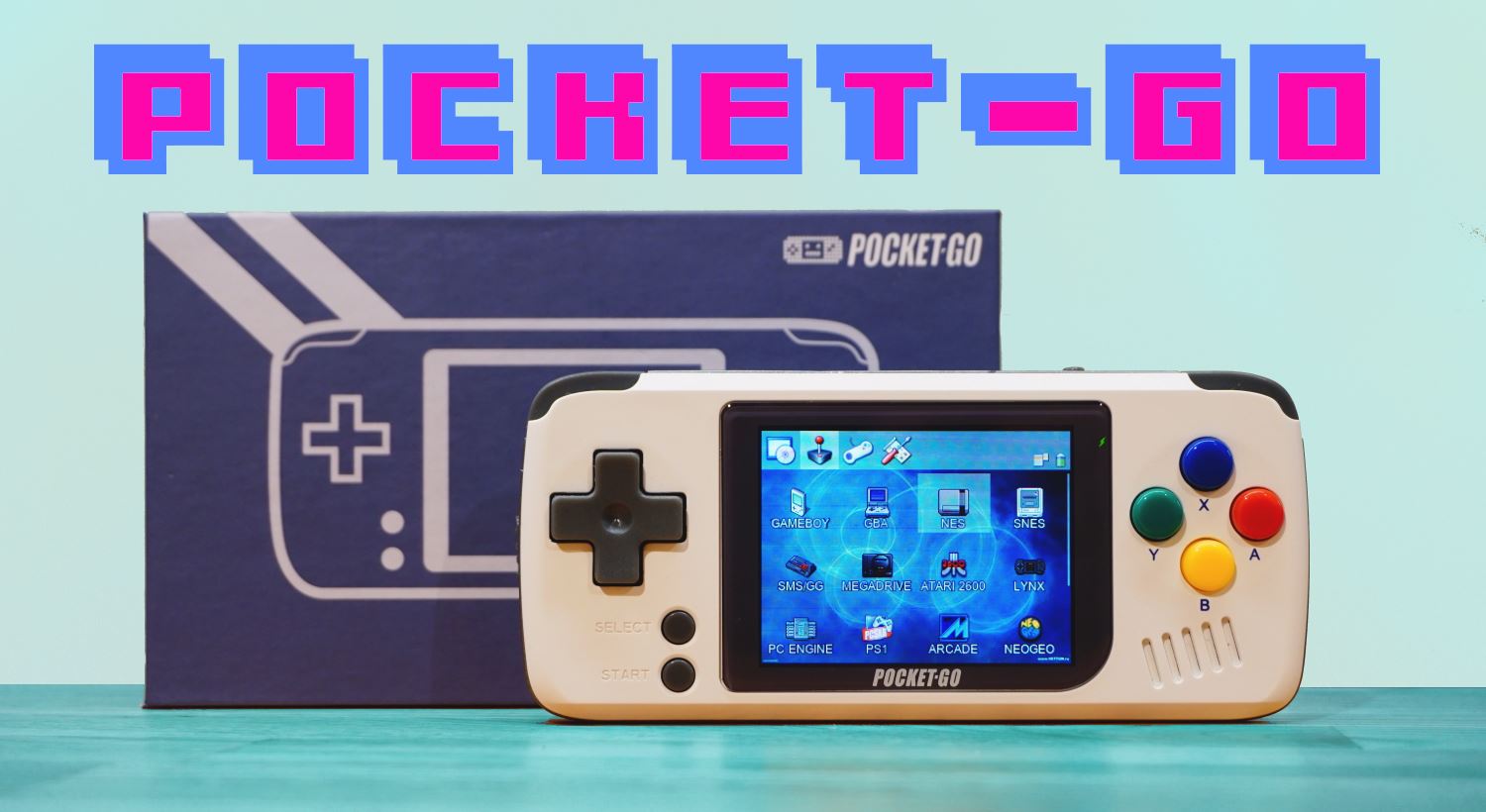 The last week or so has seen a whole load of Pocket-Go reviews go up on YouTube, with almost nothing but amazingly positive conclusions. Mine arrived yesterday and I’ve spent the last couple of days playing around on it. Are the YouTubers right? Let’s find out!

First, a bit of history. If you cast your mind back to Summer 2017 you might remember the release of the original BittBoy. It was a simple Famiclone on a chip, no SD card and no other bells and whistles either. It was a novelty item, at a price to match. 18 months after that saw the release of the New BittBoy, an improved device with removable storage and the ability to also play Game Boy and GBC games. This was running a proprietary Linux based OS called Melis.

It wasn’t long after that the New BittBoy was hacked by Chinese developer Steward. The first revisions of the New BittBoy were a pain to hack, some even requiring solder work on the motherboard.

A little while later saw a reworked motherboard that allowed for easy replacement of the Operating System without any soldering. Finally, a while later units started shipping with the NxHope firmware pre-flashed and ready to go. This is when the device saw its real success, and is the precursor to what is available to us all today – the Pocket-Go

The Pocket-Go has the same AllWinner F1C100S SoC as the New BittBoy did, a low power chip apparently (ahem) capable of up to 900Mhz and paired with a modest 32MB of DDR1 RAM.

The improvements made to the Pocket-Go over the New BittBoy are largely aesthetic, but that doesn’t necessarily mean it’s not a worthwhile upgrade. In fact, some of these aesthetic differences are quite stunning.

Starting with the fit and finish, this thing is miles ahead of the New BittBoy. In my review I mentioned that the paint finish felt strange to the touch, very matte and generally cheap feeling. Well, they’ve sorted that out. Not only is the paint job pretty much perfect but the buttons look and feel great. The shoulder buttons looks similar to those on the RS-97 but they’re smaller and there is no wobble on them, and they have a far shorter travel too. They’re good. The d-pad is also an absolute dream to use, with soft rounded edges and an almost perfectly configured pivot.

The whole device feels like it’s made of very high quality plastic, and with far more thought put in to the overall design. It’s really hard to find fault with the execution of this design at all.

Likewise, the tempered glass screen protector is gorgeous. It would have been easy to slap a flat piece of glass over the front and everyone would have been happy, but this lens has domed edges which curve down gently towards the shell. Without getting too carried away, it’s a really nice touch and helps give the Pocket-Go a very premium feel from the outside.

Things keep getting better once you’ve dismantled the thing and fitted the alternative ABXY buttons. The SNES colours really make the device pop.

A word of caution to anyone about to swap out the buttons on their device – use a screwdriver with a thin stem when removing the screw holding in the motherboard next to the battery. A chunky screwdriver will at best dent the Li-Po and at worst you could end up puncturing it.

The Pocket-Go has a 320×240 2.4″ IPS display inside it, and although it’s apparently the same display as found in the New BittBoy it looks spectacular behind that crystal clear glass lens. Honestly it’s been a long time since we had a display that looks this good in a Chinese handheld. Photos do not do it justice at all.

The device is incredibly dinky, only about a third bigger than a GB Micro. It’s very cute looking and I find it even more comfortable to use than the RS-97 despite being so small.

In case you thought this review was just going to be me gushing over my new toy, I’m afraid it’s not all great news.

The screen tearing issues from the New BittBoy have not been resolved. It was only a few seconds into Mario Kart Super Circuit that I noticed that the problem is still apparent. It’s not terrible but it can be distracting and it’s frustrating that this isn’t something they figured out, considering they’ve had nearly 6 months to do so.

Reading discussions about this, it’s not necessarily something that can only be fixed with a hardware revision. It’s possible that a driver is to blame, but whether it will ever be resolved I have no idea. I should also note that it doesn’t seem to affect all emulators, and fast moving scenes are the most obvious. Sometimes it’s unnoticeable but when it’s there it’s quite annoying. I find this a huge shame because it detracts from what is otherwise one of the most vibrant and colourful displays we’ve ever seen in a (very) cheap handheld.

The other problem, one that was also apparently present on the New BittBoy, is that the speaker gives out a quiet high pitched whine or hiss even when the volume is all the way down. If you’re in a silent room, it’s noticeable when the volume is off – but with any ambient background noise you’re probably not going to hear it unless you put the speaker to your ear.

Again, it’s not a deal breaker but if this was present in the previous generation too it’s very disappointing that they didn’t bother to fix it in this generation. Whether it’s down to bad shielding or something that can be fixed in software or by soldering in a resistor I don’t know – but I will definitely be keeping my eyes out for a solution.

As far as performance of the device goes, it’s the same as the New BittBoy. In short it’s less powerful than a JZ4760 device such as the RS-97, LDK or RG-300 but it’s just about good enough. How’s that for vague?

Some PS1 titles are playable, but not many. The device struggles with SNES, with only maybe a third or half of the titles I’ve tried running at an acceptable framerate. GBA is better for the most part, and Mega Drive seems to run very well indeed. If SNES is your thing, you’d be better off with one of the JZ4760/B handhelds – there are plenty of them at the moment.

The Pocket-Go comes preloaded with emulators for the following systems:

and a slew of ports including Quake and Quake 2, Rise of the Triad, Open Tyrian, Heretic and more.

You can expect new and updated emulators to make their way on to this device in future, but for now there’s plenty to keep us entertained. It’s worth noting that the the device comes with an SD card which you need to insert in order to boot – and mine at least was packed full of ROMs.

The biggest redeeming feature for these flaws is the price. Even with the screen tearing, the speaker hiss and the underpowered CPU – what you get for $40 is quite astonishing. You could argue that the first two flaws wouldn’t have actually cost anything to make right – chuck in a decent powerful CPU and add another $10 or $20 on to the price and that’d be close to the perfect machine for me. Oh well, maybe next time!

If you’re interested in picking one of these things up, mine arrived from retromimi.com in only about 8 days. Very impressive considering I opted for free shipping too.

Full disclosure though, it’s not impossible that they will release a new hardware revision that fixes the screen tearing and/or speaker whine in the future – so bear that in mind before parting with your $40.

15 thoughts on “Is the Pocket-Go Really That Good?”