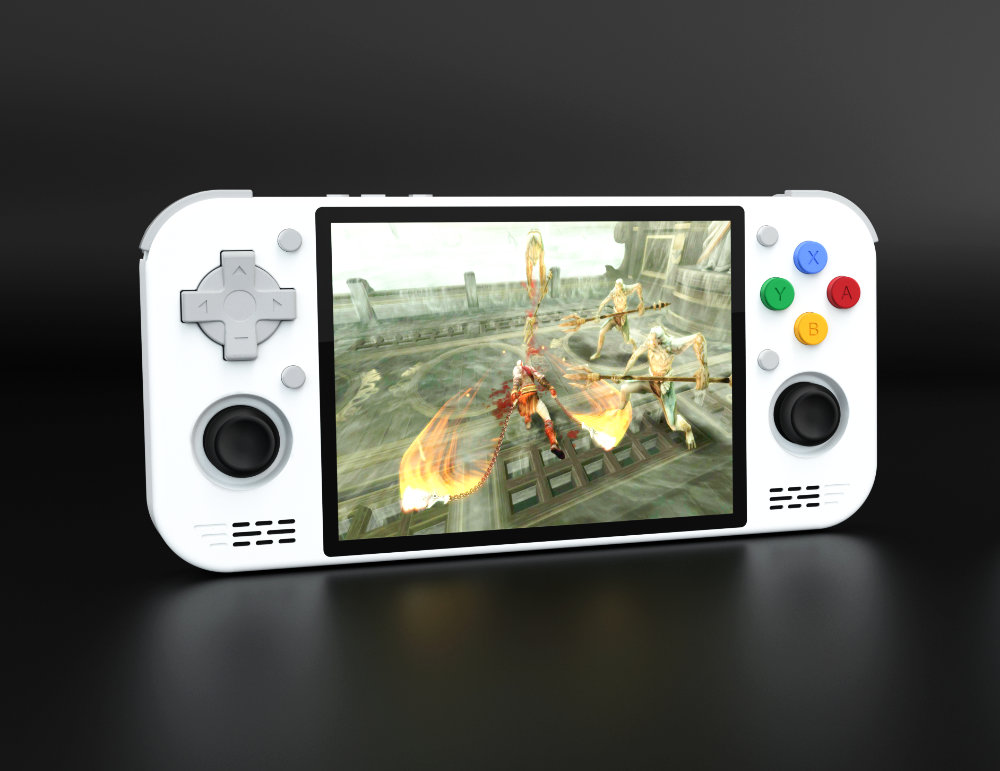 The KT R1 handheld is one in a long line of upcoming devices that promise to break through the performance barriers imposed by the RK3326. It’s been a very rocky road for the KT R1, and it’s certainly not out of the woods yet. But the specs have changed, and they’re apparently finalised now. So let’s have a look at what we’re being promised.

It started back in November over on the Chinese forums. A user named niluanxy posted a long preamble about a device he was working on called the R1. Over the course of a few posts, we learned that this handheld is going to be quite different from anything currently available.

It’s planned that there will be a few versions of the R1 to cater for different budgets. As far as I can tell the majority of the configuration is the same between them, with the main differences being RAM and storage size. It was once due to have an optional sim card slot too, but that is missing from the latest specs released today.

Unfortunately niluanxy has had some serious obstacles to overcome in the development of this machine. Originally intended to contain an AmLogic S922X, this was later switched out for the UniSoc T618 due to availability issues. The latest update from the man himself has this chip switched out yet again for a Snapdragon 845. According to his one of his recent posts, he was actually working with multiple chip suppliers simultaneously, hoping one would pay off. It looks as though the Snapdragon solution is the one that found its feet.

The Snapdragon 845 is an octa-core processor from the start of 2018. It featuring 4x Kryo 385 Gold CPUs at 2.8GHz and 4x Kryo 385 Silver CPUs at 1.8GHz. A 650MHz Adreno 630 GPU takes care of the graphics acceleration, and for what it’s worth this chip overall is more powerful than either of the two prior considerations.

The original choice of LCD has also had to be swapped out. Originally a 4″ 800×600 display, testing in January apparently revealed poor viewing angles and a high defective rate. The LCD is now a 3:2 4.5″ OCA panel with a resolution of 1620×1080. This panel has the same unfortunate aspect ratio as the Odroid-Go and clones. The super high resolution will help massivelyt with any scaling issues apparent on lower resolution screens though.

There are various renders doing the rounds with the positioning of the left analog stick and d-pad in switched positions. It seems to be that the final design will have the d-pad at the top which is likely to cause the least amount of complaints. However it was once said by niluanxy that the left side of the device may be modular. After market custom face plates may allow customers to swap out the configuration. Whether this is still the plan seems unlikely, but I haven’t seen anything to the contrary yet.

Video output will be taken care of via a USB-C port. The R1 contains dual analog sticks, D-Pad, ABXY and an extra four face buttons. On the top edge of the device you’ll see stacked shoulder buttons for R1/R2/L1/L2. This is also where the volume rocker and power button can be found. Bear in mind though that these renders are now a few months old and lots has changed in the meantime. It’s possible that the design has also been updated, but as yet there are no new renders available.

The KT R1 handheld will run Android 10 out of the box. I believe it has been heavily customised for the handheld form factor, however the R1 does also have a touchscreen.

Previously it was stated that the bootloader will be unlocked, and the device will support different OSs depending on what devs decide to port to it. There was also due to be an option to boot from the MicroSD card, with a hardware switch on the shell which tells the machine which system to boot from when turned on. Whether this is still the case is unclear at this point.

The SD845 is a fairly powerful chip, and we can expect to see much better performance in the systems already supported by RK3326 handhelds. In addition, it’s possible we’ll see some Saturn, GameCube and Wii emulation made possible too.

To get an idea of performance, take a look at the Samsung Galaxy S9 or another mobile phone that contains this chip. It’s possible that this chip will be overlocked to 3GHz in the KT R1 handheld. Niluanxy is also considering whether or not active cooling may be required.

It seems that the KT R1 handheld is the dream of one talented man working with a factory in China to get this device brought to life. Although this is his first foray into handheld manufacture, he does have a project under his belt already. The GPD Win2 aftermarket cooler was engineered and manufactured by him, and successfully funded on IndieGoGo last year.

Niluanxy has stated that he will receive a real protoype of the R1 in January, after which time an IndieGoGo campaign will be started. Shipping of the final devices is due to begin in Q1 2021.

There are going to be various hardware configurations of this handheld, and the pricing hasn’t been finalised. It’s been said that $200 will be the maximum, but things have changed so it could be higher. Colours are due to be Retro Grey, Pikachu Yellow, Plain White and Pink.

It seems strange to me that it takes a one-man-band operation like niluanxy’s to bring real innovation to this market. We have companies like Anbernic, Bittboy and Retroid who must already have stacks of cash behind them. I do wonder why are they not already blazing the trail with cutting edge devices. Obviously GPD are doing their thing, but their machines are out of reach for a lot of folk.

But before we get too carried away, this device doesn’t appear to be much closer to market than it was months ago. I understand it must be incredibly difficult to do this almost on your own, so I’m definitely willing to cut him slack. But at the same time, I’m not holding my breath.

The KT R1 moniker may not be final, and could change before it goes up for pre-order. I wish niluanxy all the best with his endeavour, and I’ll be keeping my eyes open for the IndieGoGo campaign next year.