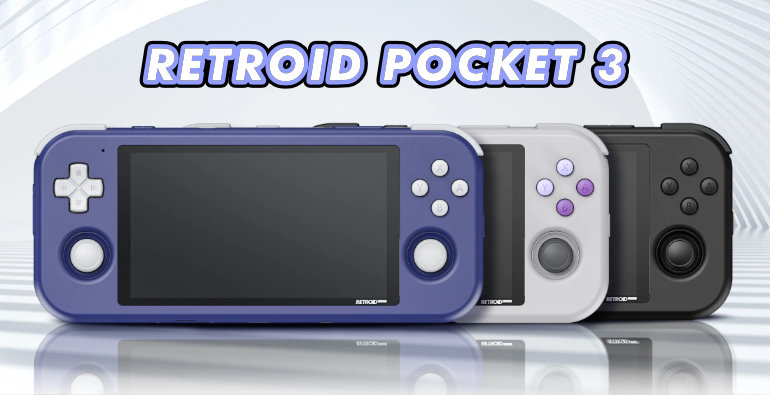 The Retroid Pocket 3 is the successor to Retroid’s budget oriented RP2+ from 2021. With a high-res widescreen and Android 11 you’d be forgiven for expecting a high price tag, but at $119 it sits nicely in the low-mid tier bracket. So what’s the catch?

Retroid have got a knack for developing good looking handhelds with an almost impulse purchase price tag. The Retroid Pocket 3 has been on the horizon for months, and we’ve sat patiently waiting for something that offered a little bit more than the slightly underwhelming 2+ did.

Whilst the 2+ had a few things going for it, it was hindered by a small screen, less than perfect controls and an entry level Android capable SoC.

The good news is that the Retroid Pocket 3 replaces that small panel with a widescreen touch enabled 4.7″ 16:9 display. The slightly strange resolution of 1334*750 can be explained by the fact that some iPhones up to the iPhone 9 8 used this size and resolution, so the panels are probably cheap and plentiful right now.

The bad news is that the Retroid Pocket 3 uses that same Unisoc T310 SoC as found in the RP2+. Whilst Retroid claim a 20-30% performance increase from the 2+ due to a newer Android implementation, it’s not guaranteed that this will translate to a noticeable real world difference in emulators. It speaks volumes that the performance gains graphic shown on the Retroid site compare the RP3 to the RP2, not the more recent RP2+.

There are two variants of the Retroid Pocket 3 though, for an extra $10 you can grab the 3GB model. That’s 1GB extra than the base model and the RP2+. This may actually make a difference, however it’s worth noting that the Android 11 system uses more RAM than Android 9. Again, it remains to be seen how this translates in the real world.

Looking at the front of the device you’d be forgiven for wondering where the start and select buttons have gone. In their infinite wisdom, the Retroid engineers have actually put these on top of the device next to R1/R2. RetroArch Hotkeys be gone.

The Retroid Pocket 3 comes with a similar L1/R1/L2/R2 implementation as the RP2+, but also adds clickable analogue sticks for L3/R3. As well as a newly updated launcher, which was actually one of the nicer features of the RP2+, the RP3 has all the usual I/O including HDMI, microSD, BT5.0, 5Ghz WiFi and 3.5mm audio jack. The device is powered by a 4000mAh cell which is the same capacity as the one in the RP2+. Given the higher demands of Android 11 and higher resolution panel, battery life may be slightly shorter than the RP2+.

The 3GB model comes in at $129 and with $15 shipping to the UK puts the price tag at $144. There are a few colours to choose from, pretty much the same colours available when the RP2+ went up for pre-order and the addition of a white/grey model. Shipping starts towards the end of August and I’m sure our favourite YouTubers will have reviews out soon.

24 thoughts on “The Retroid Pocket 3 is Here”