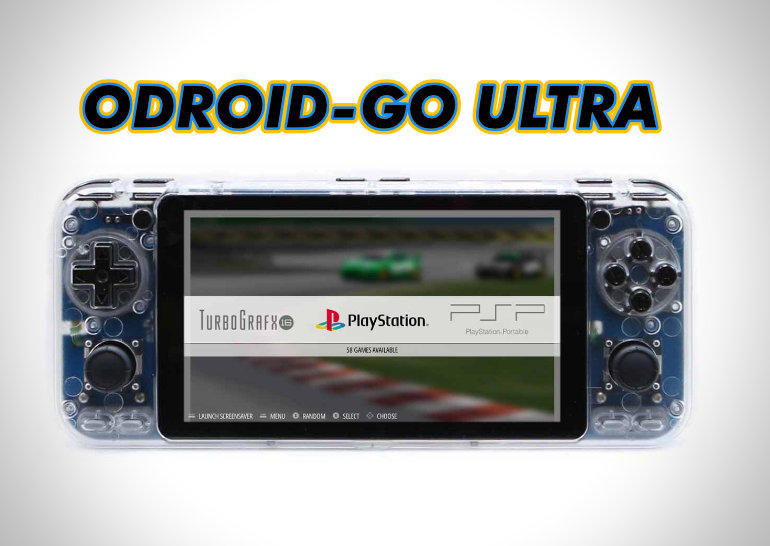 South Korean electronics manufacturer HardKernel are back with their fourth iteration in the Odroid-Go handheld range. The Odroid-Go Ultra (OGU) raises the bar again with an SoC not seen before in a handheld and offers a decent performance bump over their previous OGS.

It’s been nearly two years since the release of the Odroid-Go Super and until the end of last month it looked as though they might be done with handheld devices. But in typical HardKernel fashion, an out of the blue forum post recently announced their latest handheld, the Odroid-Go Ultra.

The OGU uses the same shell and LCD as the OGS, but the PCB and has been built from the ground up to accommodate the Amlogic S922X SoC. Whilst not brand new, this 2018 SoC boasts four Cortex A73 cores running at 2.2Ghz, and two Cortex A53 cores at 2.0Ghz. The S922X is featured in another HardKernel product already, the N2+ single board computer. It’s also widely available on AliExpress in a host of different Android TV boxes.

Whilst we can expect the OGU to perform similarly to the N2+, it should be noted that whilst the N2+ is available with 4GB of RAM, the OGU will ship with 2GB. Added to that, the OGU is passively cooled whilst the N2+ has an option for active cooling. When checking performance comparisons to the N2+ this should be taken into consideration.

Having said that, even with the current OGU specs we can expect excellent N64, Dreamcast and PSP emulation. And yes, GameCube is not completely out of reach either, although this system will really test the device so don’t expect great performance.

The Odroid-Go Ultra uses the same 854*480 LCD as the OGS, and for the most part the device looks identical. It does look as though they’re using Switch style analogue sticks this time around, but they could just be the same sticks with a new hat. There are potentially some small changes made to the inside of the shell too, however Jutleys from RGHandhelds was able to fit his OGU board into a 3rd party metal shell designed for the OGS. It did require some tweaking around the speaker area because the OGU heatsink gets in the way.

The OGU will ship with Ubuntu 20.04.4 and a modified EmulationStation frontend with Libretro. Whilst Android is not supported officially by HardKernel, we’ll possibly see an Android build for this handheld in future. It would be really good to see a 4GB variant of this handheld to help facilitate this, but it doesn’t look as though that’s on the cards.

The supplied charging cable has both USB-A and USB-C plugs to feed power to both of the power management systems on the board simultaneously, and achieve faster charging. Whether the quoted charge time is based on using this cable or a standard 1 plug cable is not known yet.

Whether the OGU will be another DIY kit like their previous handhelds is not yet known. There are no assembly guides available that I can see, but this could be because 1) assembly is the same as the OGS or 2) they haven’t got round to it yet. I would imagine that if this system was pre-built it would have been mentioned in the original forum post. The box received by testers implies it is another DIY kit, but it also has the Android logo on it so who knows.

The OGU is due to be released in October 2022 and comes in a choice of transparent and grey shells. The listed price is $111 but presumably this is before any shipping costs from South Korea so expect the final price to be a little higher.