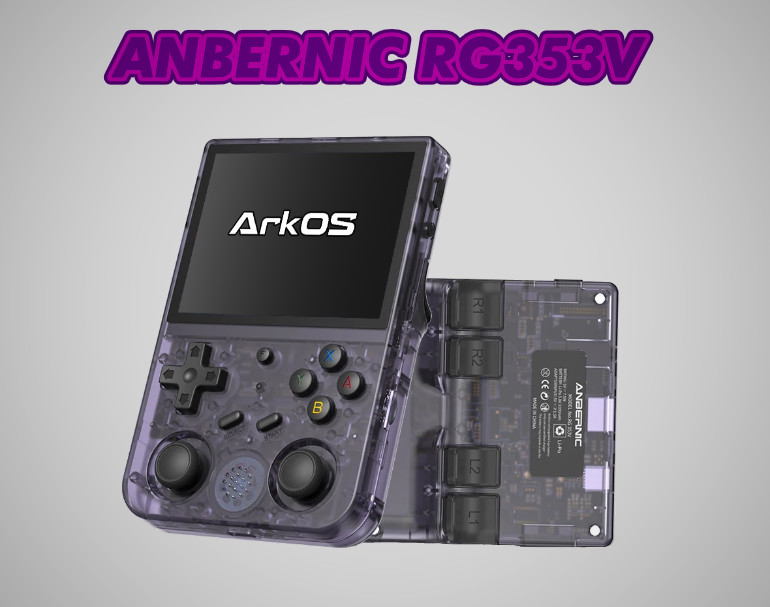 At the heart of the RG353V is the same RockChip RK3566 found in the RG353P and the RG503. It’s a reasonably powerful chip that won’t blow any minds. It’s not as powerful as the RK3399 in the RG552 but it’s newer, more power efficient, and runs cooler.

Of the two variants, the more expensive is the RG353V. It comes with 2GB of RAM and the ability to dual boot Batocera and Android 11. The RG353VS has just 1GB of RAM and does not ship with Android. The only other differences between these versions are that the RG353V contains a 32GB eMMC for the Android install, and a touch enabled LCD. Both variants run the non-Android OS from a microSD card.

The Anbernic RG353V is one of the more complete vertical devices in terms of inputs. It’s not often that you see a vertically oriented machine with dual analogue sticks on it. In fact the PowKiddy RGB20S is the only one I can think of off the top of my head. The caveat in this case is that they sit right at the bottom of the device, because the d-pad and ABXY occupy the prime spot. To me it looks very uncomfortable to use these analogue sticks, especially when combined with the shoulder buttons which are much further up. Speculation though as I don’t have one and don’t have much interest in getting one.

The device has a 3.5″ 640*480 IPS display as is the norm for these mid-tier handhelds. Whether there is much difference in colour temperature between the touch/non-touch versions remains to be seen.

The RG353V(S) is by no means a mini handheld, and in fact is one of the larger vertical machines from Anbernic. Whilst it could be considered pocketable, it’s certainly not in the same realm as the ever popular Miyoo Mini. Anbernic does have their own “mini” handheld in development, presumeably to compete with the now out of production Miyoo Mini.

As of the 3rd October ArkOS 2.0 is available for for the RG353V courtesy of Christian Haitian’s github. The instructions for flashing this OS to an SD card can be found here. It is recommended by the developer to use a high quality, large capacity SD card for this to avoid issues. The other benefit of using a fresh card is that you can revert to the stock microSD card, if necessary.

Global hotkey combinations for ArkOS can be found here, an extensive FAQ here, and downloads for the OS image are here.

The RG353V and RG353VS are due to start shipping out mid October. The prices vary from place to place so if you’re interested make sure to shop around. Currently the cheapest place to order is directly from Anbernic’s website, at $120.99 for the Android/Batocera version. It’s worth checking their store on AliExpress too as prices are likely to fluctuate.