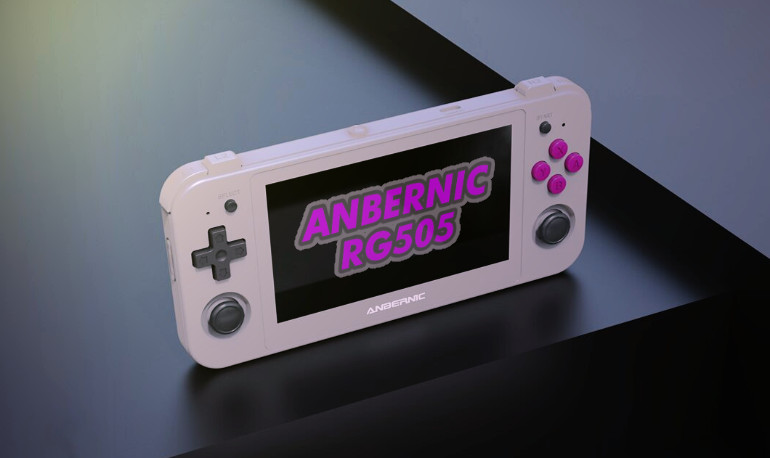 Hot on the heels of Retroid’s newest machine comes the Anbernic RG505. Both manufacturers have chosen the same SoC this time around, and the end results are two very similar handhelds. Despite this, there are some differences between the consoles, let’s take a look.

If 2x integer scaling for PSP is a must for you, then Anbernic’s machine is the one. The Anbernic RG505 also contains the same OLED panel as the PS Vita, which is far less power hungry than an LCD equivalent. OLEDs in general have excellent contrast, vivid colours and are able to display deep blacks, the PS Vita OLED was no exception.

However it is an old panel, assuming they are actually using the same SKU, and the Vita was not as bright as modern day OLEDs.

The RG505 also has a larger battery than the 3 Plus by 500mAh and runs Android 12 compared to Android 11. I have no doubt that the pricing of the RG505 was in part decided by the price of Retroid’s console, and assuming Anbernic’s usual build quality I think they’ve done well with the price point this time.

Whilst the RG505 seems to have it beat on some fronts, the RP3+ has some tricks up its sleeve. Its higher resolution panel is going to look nicer for non-integer scaled systems, and at an advertised 450nits it is a lot brighter than the PS Vita’s OLED panel.

The Anbernic RG505 apparently won’t ship with any Google Play Services, so the Play Store won’t be present on the stock OS. Of course it is probably possible to get it working with some tinkering, but the RP3+ comes with these features already installed as stock. As well as that, you’ll get Retroid’s excellent launcher pre-installed.

The console is also slightly smaller and almost 50g lighter than the Anbernic RG505, but its screen is ~0.3″ smaller than the RG505 too. Retroid’s console also has stacked shoulder buttons unlike the RG505, which is preferable for most people and may account for the official specs saying it’s it’s a few mm thicker than the RG505.

The base price is also lower, however current promotions will affect this and certain stores may or may not label the parcel such that it incurs tax on import.

The RG505 goes on pre-order today and is available in grey, turquoise and yellow. There’s a small discount available on the official store if you order in the next 12 days, and a $10 coupon at Aliexpress too.

Be aware that shipping incurs extra tax if you’re in the UK (possibly in some US states too) and shipping is extra. Check both stores to see which is cheapest for you. For me in the UK it’s a grand total of $191 shipped, which is too much. I miss the days when we paid no tax at Aliexpress 🙁

Affiliated links above, if you choose.

8 thoughts on “How Does The Anbernic RG505 Fare Against Retroid’s New Handheld?”