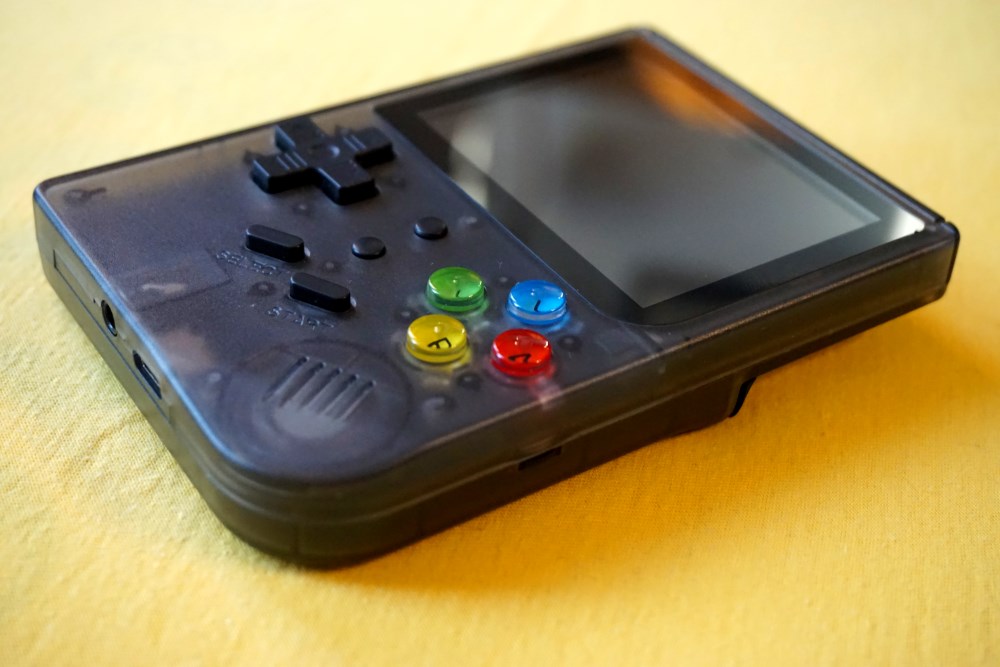 Despite being almost 10 years old, the JZ4760/B SoC from Ingenic is currently living it up in a whole host of different handheld systems. It’s said that they can currently be had for as little as $5 with a large enough order, so it’s hardly surprising that this capable little chip is so prevalent at the moment.

The RetroGame 300 (or RG300) is the latest in a line of handhelds powered by this SoC, and by now we should all be very familiar with its performance. In short, it’s good for everything up to and including the SNES, though some more demanding SNES titles could benefit from extra juice. A very small handful of PS1 games are also playable, but you can forget about N64, Dreamcast or anything from that era and later.

The RG300 is the 2nd portrait mode handheld to contain the JZ4760B (the LDK being the first) and the design is very reminiscent of the RetroMini, albeit it’s a good bit bigger and more comfortable to use.

The first thing that I noticed lifting the thing out of its box is the weight on it. at 150g it’s almost double the weight of the PocketGo and a good 25g heavier than the RS-97 too. This can be attributed in part to the choice of battery. We usually see the 800mah BL-5B clone in these devices, but the designers of the RG300 have opted for the mammoth 1800mah BP-5L in this thing – which gets you between 5 and 6 hours of game play.

We also have a larger LCD than normal in here, it’s a 3 inch TFT panel and it sits underneath a tempered glass screen lens. The LCD is the devices weak point, it’s by no means bad but we’ve been spoiled by the beautiful IPS panel inside the PocketGo.

The viewing angles are actually decent from all but the bottom edge where the image inverts at around 45 degrees. But the biggest issue is with the brightness, it’s not as bright or vivid as the PocketGo panel and outside in direct sunlight it really shows its weakness. It’s actually not quite as good as the panel in the latest non-IPS version of the RS-97 either – but it’s pretty close. To tell the truth, before the BittBoy and PocketGo I wouldn’t have really thought twice about this LCD considering the price of the unit – but as mentioned earlier we’ve definitely been spoiled by those IPS panels.

The D-Pad is the same as the one found in RetroMax and RetroMini as well as some of those newer Famiclone handhelds. It has some shallow textured cut outs for grip, it’s firm but easy to manoeuvre and the pivot is set just right. Likewise the face buttons are perfectly good with a couple of millimetre travel and a soft click once pushed all the way in.

This shell is very similar to the RetroMax and the (apparently) forthcoming RetroPlus, but one major difference is the shoulder buttons. I actually prefer the shoulder buttons of the RetroMax, but only really for aesthetic reasons. These have a short travel and respond with a quiet dull click once pressed. They’re also very well placed for larger hands. You can easily use either your finger tips or the middle of your fingers to hit them without any trouble.

Overall this is one of the most comfortable devices I’ve ever played and if you’re an adult with adult sized hands you’ll be able to play this thing for many hours without cramping up.

It goes without saying that RetroFW is available for this handheld, and to install it’s as simple as removing the SD card from behind the battery and flashing the image. There’s no disassembly required.

My unit came with a 16GB microSD behind the battery, and a 32GB microSD in the slot on the left hand side which will be more than enough. I know some people tend to replace these SD cards as it’s claimed that they’re unreliable – however I’ve not yet had any issues. In fact for what it’s worth the ones in this unit are branded by Toshiba (whether or not they’re genuine though is anyone’s guess).

This is also the first device to come with USB-C on board and it of course comes bundled with a cable too.

In my opinion this iteration of the JZ4760B wins. The obvious alternatives being the RS-97 which is great but has no screen protection and wobbly shoulder buttons and the LDK Portrait which is too uncomfortable to use for extended periods of time. The LDK Landscape is probably better than the LDK Portrait, but it uses the slightly less powerful non-B version of the chip, and they all have a smaller screen and a less powerful battery.

The only weakness of the RG300 is the LCD, but it’s by no means a deal breaker. There is talk of the possibility of manually replacing the LCD with an IPS panel – I’ll be watching out for results on that because that would make this the absolute best JZ4760B machine possible I reckon.

The RG300 can be had at any of the below stores. I got mine from Aliexpress but it’s worth shopping around for the best deal.