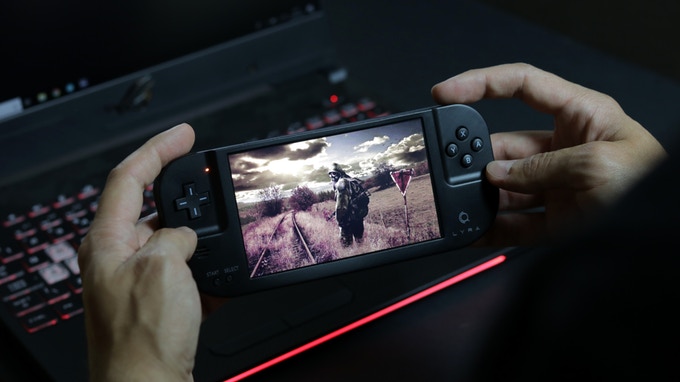 The Raspberry Pi Compute Modules have never gotten much love from manufacturers of obscure handhelds. In many ways they’re the perfect candidate for driving these things – the software is already there, the developer community is large and active and best yet, it’s almost guaranteed that a substantial hardware improvement will be released once every few years.

We have seen the RPi Compute Module 3 (CM3) used once before in the FreePlay CM3 kit. This kit uses a heavily modified GBA shell to accommodate a custom board which the CM3 docks with – it brings all the power of the RPi3 to a familiar handheld shell. I love the idea, but for me the FreePlay kit isn’t executed very well. A fully custom shell would be a much better solution.

Enter the Creoqode Lyra then.

The Lyra is a handheld console powered by the soon-to-be previous generation CM3L, a version of the CM3 without onboard flash memory.

The company have launched a KickStarter campaign to raise £30k to bring the Lyra to life – a goal that is already met. For your money you can choose whether you want a pre-assembled unit or a kit that you put together yourself – a task that requires no soldering and can apparently be achieved in 15 minutes.

The kit comes with a custom made shell, contacts and buttons, as well as their own motherboard, an 800×480 LCD, a 3000mah Li-Ion cell and the required screws and tools to put the thing together. It also ships with a CM3, so you don’t need to source this yourself.

The handheld will run RetroPie, which allows for a huge library of well optimised emulators to run on this device.

It sounds great, apart from a few rather large drawbacks. The first and most obvious being that unless you’ve been sleeping under a rock you’ll know that the RPi4 has just been released.

Whilst the CM version of the RPi4 isn’t out yet, it will presumably be released at some point soon and it might have made more sense to hold out for that before launching this project. However, Creoqode have said that you’ll be able to swap out the board yourself for the CM4 once it’s available – though this will obviously cost you extra.

The second issue for me is that it’s just ugly, and I also wonder whether recessing the controls like that was a great idea from an ergonomic standpoint.

A 4:3 ratio 640×480 LCD might have made more sense too, rather than the widescreen that they’ve gone for.

I might have been able to overlook these drawbacks though if it wasn’t for the price. The DIY kit costs a whopping £149, and if you want a pre-assembled unit you’re gona have to part with £179 for this thing.

I understand that they’ve had to manufacture their own board and housing, but given that the rest of the components (apart from the CM3) cost pennies to source it seems rather a high asking price for a very sparsely populated motherboard and a plastic shell.

However, this is definitely a step in the right direction I reckon. I really hope that other companies take note of this form factor and run with it. If we could get some Chinese manufactured kits like these in a variety of form factors we might finally be able to leave those ageing Ingenic chips behind and move forward toward N64, GameCube and Dreamcast emulation in a non-Android handheld – and with any luck for a far more reasonable price than this.

If you’re interested, head over to the KickStarter page for some more details.