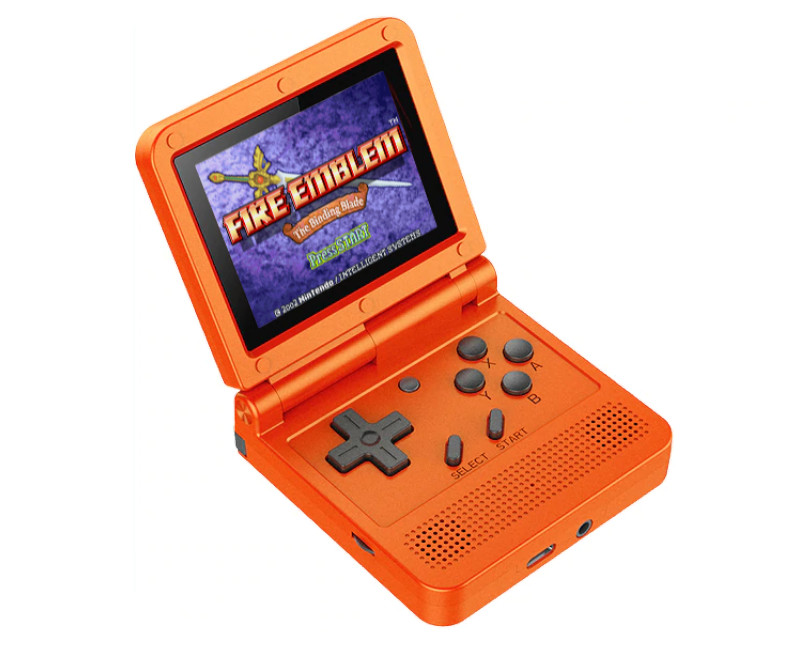 Out of nowhere, the PowKiddy V90 has popped up on AliExpress today. Rumour has it that the PowKiddy V90 is the same hardware as the original PocketGo, but made to fit inside a clamshell reminiscent of the GBA SP.

The V90 has a 3″ 320×240 IPS display, which is larger than the one found in the original PocketGo. It’s the same size as the one in the PowKiddy Q90 but we don’t yet know if it’s the same LCD. I wonder if they’ve solved the screen tearing issues? Only time will tell.

If it shares hardware with the PocketGo and Q90 then it probably runs the same Linux based NxHope OS. That hardware is AllWinner F1C100S ARM9 based, rather than Ingenic JZ* based like most other devices of a similar caliber. NxHope is a decent OS with plenty of emulators and designed to look like RetroFW, but is unfortunately closed source. The hardware is capable of some PS1 emulation, but nothing more advanced than that.

Unlike the PocketGo and Q90, this one has 4 shoulder buttons on it. There’s not an awful lot of use for those except for a handful of PS1 titles. The PowKiddy V90 also has USB-C charging, a 1020mAh battery and a headphone jack. The OS and ROMs are stored on an accessible microSD card.

It’s nice to see another clamshell machine come out, especially since the SP design is usually reserved for very low quality GBA SP clones. Clamshells are my preferred design for taking out and about because they fold up small and the screen is protected when not in use. The PowKiddy V90 is available now for $40 at AliExpress, in lemon yellow and carp red (aka orange).

31 thoughts on “The PowKiddy V90 Is A Clamshell PocketGo”