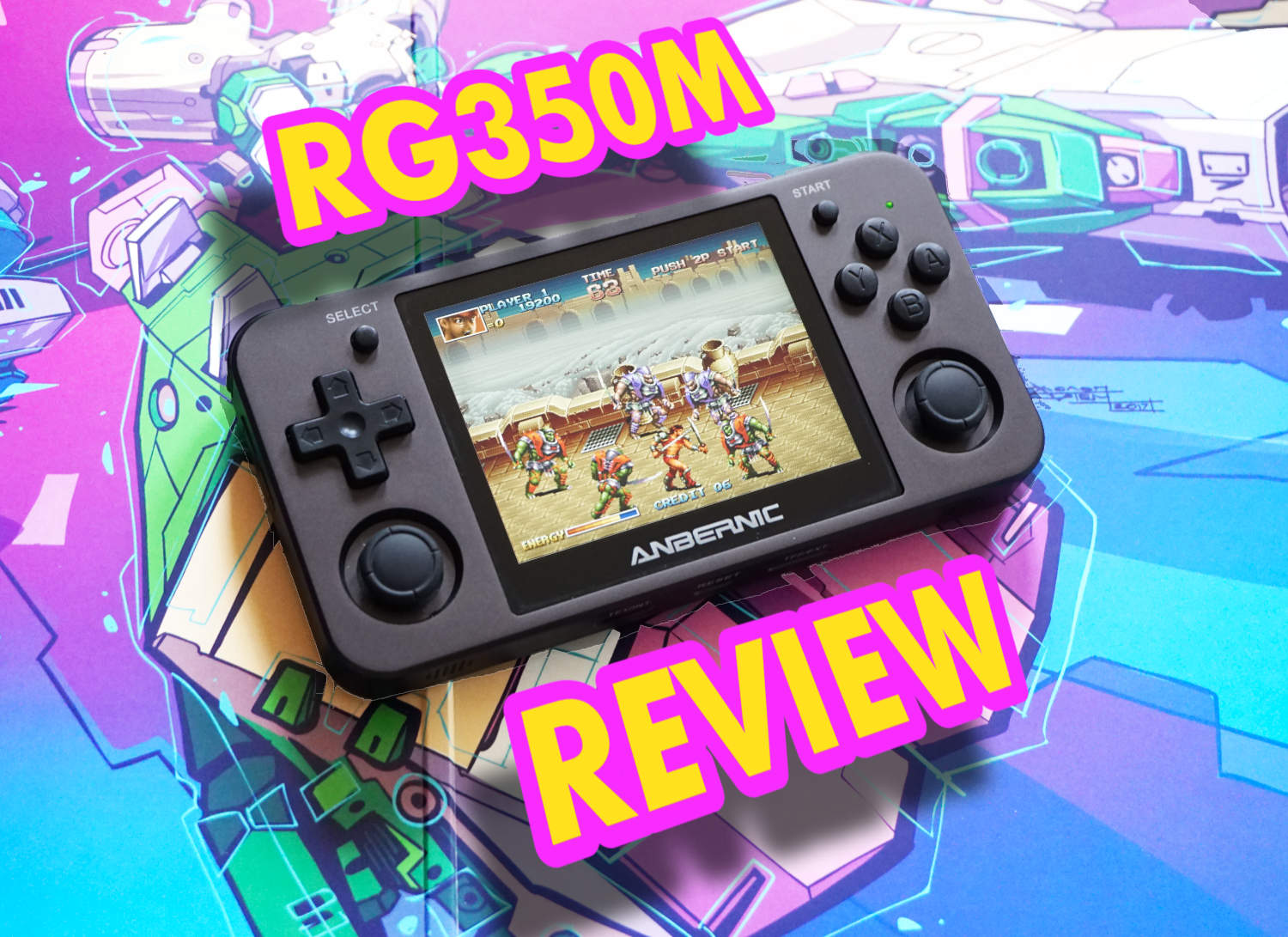 I know I’m late to the party with this one, but it would be a shame to not review the RG350M. Some of the recent reviews on this site haven’t been what you would call glowing, and it’s rare that you come across a handheld quite as good as this. So to prove I’m not just an old stick in the mud who likes to whinge, have a read of some nice things I have to say in the Anbernic RG350M review.

There’s nothing new in this product really, the RG350M is basically the same machine as the RG350 released last year. But it’s had a couple of iterations since then, including a metal variant of the original design. The RG350M is the third in a family of four versions of this machine, the fourth being the soon to be released RG280M.

IMPROVEMENTS ON THE DESIGN

The RG350M takes the metal shell concept from November 2019 and improves upon it massively. The motherboard has had a complete re-think, moving various buttons and ports to better positions on the shell. Both SD cards are now accessible externally and the dpad and analog stick placements are swapped. In fact the analog sticks have been completely replaced for wider, low profile ones too. And to top it off, that low resolution 320×240 LCD has been replaced for a 640×480 one. Not just that, it’s apparently been laminated too, so the clarity is really good. A full list of changes to the original design are below.

If you compare this shell to that of the RG350 Metal, you can see that it’s a complete re-design. The Metal RG350 was really chunky, a good 4mm fatter than the original RG350. The RG350M on the other hand is barely any bigger at all. Maybe a millimetre fatter than the original plastic design I reckon, in the absence of calipers. RG350M on the left, RG350 Metal on the right.

First things first, the new analog sticks are nothing short of dreamy. They sit flush to the rest of the controls, and have a larger surface area than before. They’re very nice to use. Unlike the previous sticks, these do not have rubber caps, they’re moulded from one solid piece of rubberised plastic. I’m pretty sure they’re the same as or clones of the Switch analog sticks, but don’t quote me because I don’t have a Switch.

Likewise the dpad is a shining example of how a dpad should be done. Whilst there was not much to complain about on the previous two versions, the dpad on the RG350M is much better. There is no mushiness at all, it has a perfect pivot and the indented ridges of the previous design have been removed. And of course, the placement is better for those of us with bigger hands now that it’s up top.

The rest of the controls are pretty much the same, that is to say they’re really very good. All four triggers are easily reached and click softly when pushed from any angle. The start and select buttons are slightly taller than they were in the previous Metal version too, so you don’t need to get your finger nail on them to press them in.

As previously mentioned, the LCD is now a laminated 640×480 IPS display. Comparing devices side by side, it’s really obvious to see. The difference doesn’t really come out very well on camera, but believe me that in person the new display is so crisp and clear that it’s hard to see how we put up with 320×240 for so long. The colour temperature is slightly more warm/pink on the RG350M, which I prefer to the blueish hue of the previous models. A full resolution version of the the below image can be found here.

The biggest giveaway that the RG350M has a new LCD though is the lack of any pixel grid. It’s weird that I never really noticed it before but it’s really obvious on the previous models now. There’s no visible pixel grid on the RG350M, it is bright and colourful and the viewing angles are exceptionally good. There is no inversion or fading of colours at any angle, all the way down to 180 degrees in any direction. Whilst multiples of 320×240 don’t play very nicely with GBA, there is a definite improvement in clarity when viewed on a 640×480 screen. Of course you’ll never get as crisp an image for GBA as you do on the RK2020 or Odroid-Go Advance with its perfect integer scaling, but it is better now than it was on previous devices.

The RG350M contains the same JZ4770 CPU found in the following other handhelds:

You can expect very good emulation of all consoles up to and including the PlayStation 1. But emulation isn’t all it can do. OpenDingux is built on Linux, so there are plenty of ported games available for it too. Just have browse through this repository, the library is extensive!

The shipped system is a OpenDingux, and it comes pre-loaded with a ton of emulators, games and ports. There was only one 16GB SD card in mine, and it also came pre-loaded with thousands of ROMs. Strangely, lots of them are ROM hacks, and they’re all numbered so it’s impossible to find anything alphabetically. I’ve deleted them all and loaded my own.

As I type, the ROGUE firmware has just been updated and released for the RG350M. You can download this replacement OS courtesy of Ninoh-FOX from here. Be aware that if your RG350M only came with one SD card, then flashing a new OS will wipe out all your ROMs and saves. Back them up if you need to.

It’s no exaggeration to say that the RG350M has the best build quality of any Chinese handheld I’ve ever owned. I’m not saying that frivolously because it’s made of metal, it is incredibly impressive how well designed and assembled it is. The previous metal version of the RG350 did have its problems. People reported the analog sticks getting stuck, or shoulder buttons not quite clicking properly. That’s because all Anbernic did was take the RG350 board and buttons and put them in a metal shell, with different tolerances. The RG350M has had a complete overhaul to accommodate its new casing, and it really shows.

You could easily mistake it for a product from one of the big boys, apart from the fact they’d never consider building a handheld from metal because it’s too expensive.

We are in an era of higher powered ARM based handhelds now, whether that be Android or Linux based machines. Gamers rightfully expect to be able to emulate consoles like the PSP, N64 and Dreamcast on their handhelds these days. Whilst it’s true that other machines can handle some of that, it is really touch and go whether you’ll get the performance from any given game.

There’s something quite comforting about knowing with some certainty that whatever you want to play on the RG350M will probably work just fine, within its limitations. And I would say that OpenDingux is a far superior system to any of those available for the Odroid-Go Advance or RK2020. It has had many many years of polishing, it’s customisable, stable, straightforward and overall a pleasure to use.

The RG350M is the flagship JZ4770 handheld. It took a few attempts for Anbernic to get there, but they really did it in end. It’s hard to find much to criticise it for, but if pushed I would say that it is heavy. At roughly 250g, it’s a good 85g heavier than the original plastic version. It’s the metal that makes it what it is though, it looks and feels rock solid and it screams ‘premium product’ from every angle. Anbernic learned from their first attempt, and improved upon it in almost every way. Credit to them.

The RG350M is available all over the place now, if you’re after one then I would just go wherever they’re cheapest on the day.

I should probably say here that I paid in full for my RG350M, it wasn’t donated for review. Not that it makes any difference to the way I review something. If you’re sensing shenanigans by my outrageous positivity, then rest assured it is because I am genuinely impressed. If you prefer the articles with more whinging and criticism, then just you wait for the PowKiddy V90 review 😀

As usual, if you use a link on this site to make a purchase, I get a few cents towards the upkeep of this site. It doesn’t cost you anything and it’s much appreciated.