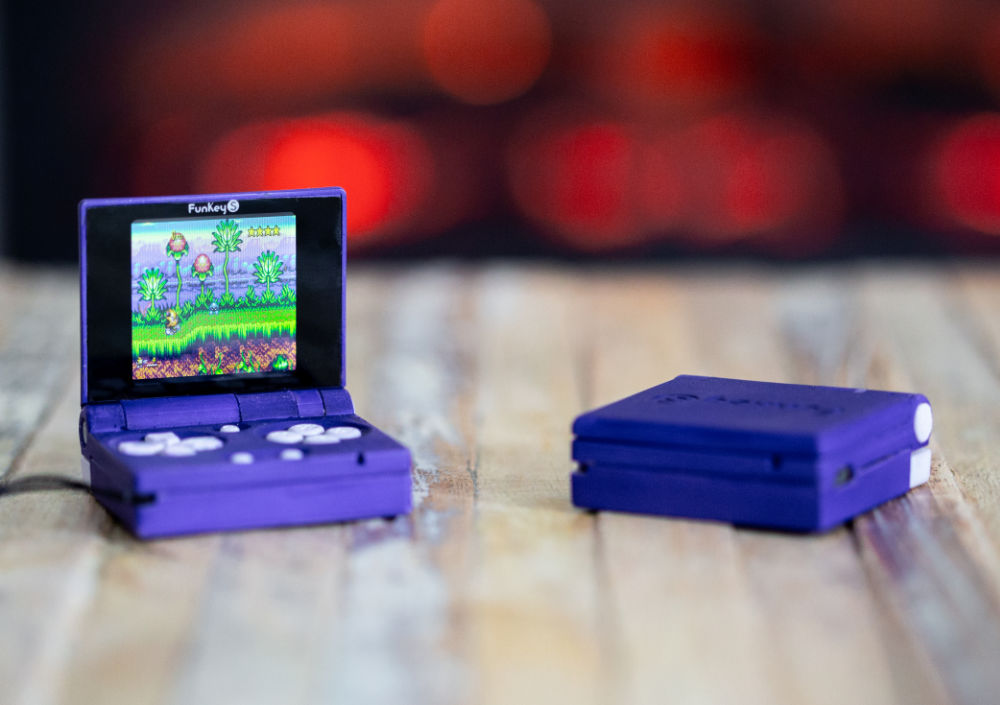 If the likes of the RG280V and GKD Mini aren’t quite small enough for you, get your magnifying glass out because there’s a few even tinier handhelds on their way. The FunKey S retro handheld is first up, but there may be a couple of others on their way too.

The originators of this strange phenomenon are the FunKey Project, and they successfully crowd funded their own dinky little clamshell handheld back in Summer. In fact they raised the required €30k in about 3 hours, which is pretty impressive.

You might think that a handheld measuring a tiny 4x4cm when closed would probably not be up to much. But don’t be fooled by its size! The FunKey S retro handheld manages to cram a 1.2GhZ ARM CPU and 64MB of RAM inside that shell. That’s more than enough to emulate most machines up to and including the PlayStation 1. The chip powering the FunKey S is the AllWinner V3S, you can read more about it here if you’re interested.

The 1.54″ IPS display runs at 240×240, so it is a perfect square. The GBAs 240×160 resolution should look great on this LCD, with small black borders across the top and bottom. It’ll be interesting to see how other machines with a native resolution greater than 240px look on this display.

One of things I like best about the FunKey S is the pick up and and play approach they’ve taken. Their website states that the handheld takes a mere 5 seconds to boot. Even better, once you’re done you can simply shut the lid and it’ll save your current game before shutting down. This lends itself really nicely to the scenarios I imagine using this handheld, namely to kill some time on the bus or train, or on a lunch break at work.

The other awesome thing about the FunKey S is that it is truly Open Source. You can find everything from drivers and OS source code, launchers, emulators and even 3D print files over on their github. I wish more companies would adopt this approach! It means developers and tinkerers can bring all manner of software and mods to the device – hopefully keeping it alive and interesting for many years to come.

The FunKey S retro handheld runs on Linux, with the RetroFE front end by default. You can probably expect to see alternative front ends and launchers developed by the community given time.

The FunKey S is due to start shipping out to backers this month, with pre-orders via their website to arrive sometime in December.

If I was being cynical I’d say that the Dark Cat Game is just a cash in on the success of the FunKey S project. But aspersions aside, it does at least look like they’ve innovated their own design.

The Dark Cat Game popped up on the Chinese forums a couple of days ago, and we don’t really know much about it yet. We do know that the 2″ IPS display runs at a more common 320×240 resolution though. And it looks as though they either haven’t decided on the CPU yet, or it’ll come in a few variants.

Listed on the image are the AllWinner F1C200S (same family as the PocketGo v1 and PowKiddy V90), the AllWInner B300 and an unknown X3 processor. Given the stated price range of $15-$60, it’s reasonable to assume there will be three different variants, with different prices.

There is no release date for this handheld yet, and their website currently displays nothing but ten second countdown.

One thing is probable, the makers of this device won’t be sharing their source code with the world on github. Although the device may get some support from community developers, don’t bank on it.

What the hell is going on. I’ve no idea if this is real or a homemade project, but to me the shell doesn’t look 3D printed. If this microscopic GBA ever makes it to market, the world has officially gone mad. I kinda want one though still.

WHICH ONE SHOULD YOU GET?

If you fancy a tiny handheld to stick on your keychain, the FunKey S is the most promising looking gadget. It’s obvious the developers have invested a lot into the design and functionality of this machine, and with its Open Source design it’s almost certainly going to outlive the competition in this niche.

I look forward to seeing where the community takes this gadget in the coming months!

8 thoughts on “Smaller is Better? A Swarm of Tiny Handhelds is Coming”