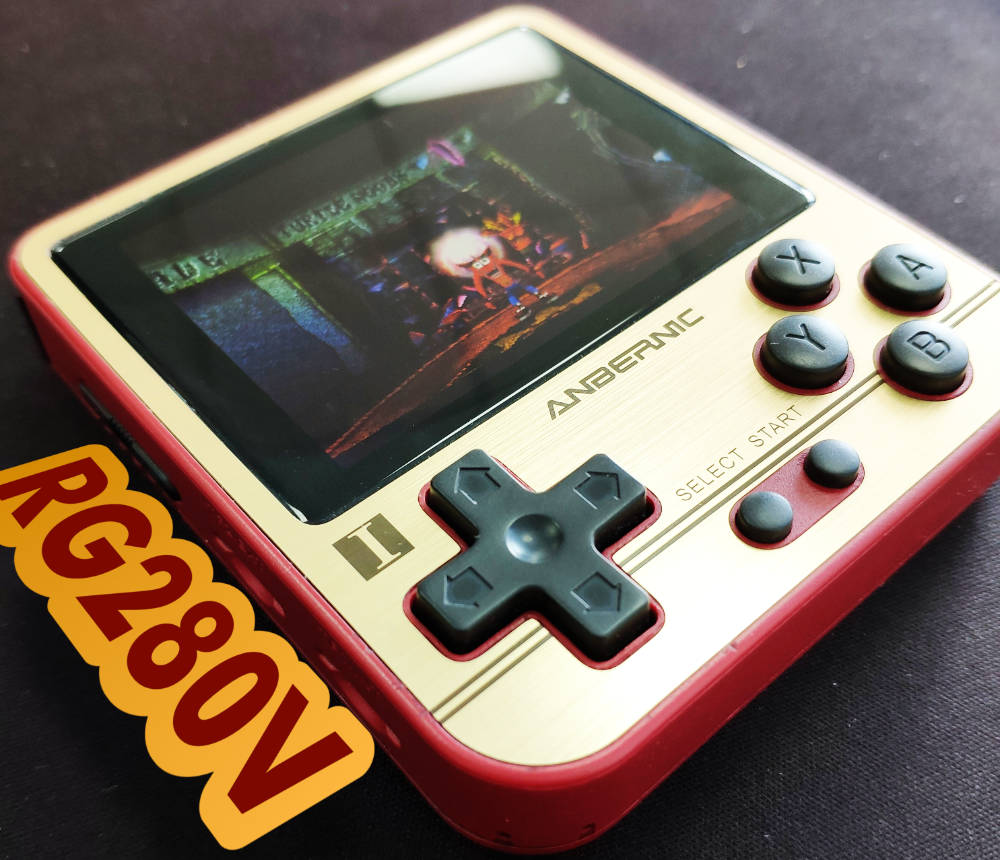 Before the RG351P was confirmed, a version of this chart was posted on Baidu. It shows the naming convention for Anbernic’s handhelds past and present. The inclusion of a “V” for vertical raised a few eyebrows, as the RG300 didn’t make use of that particular nomenclature. It was of course speculated that a vertical machine was in the pipeline from them, and here it is – the Anbernic RG280V.

The RG280V is the latest in a long line of Ingenic based handhelds from the Anbernic camp. It’s a dinky looking machine which resembles the LDK in some ways, whilst also adding a Famicom aesthetic. I think most people were hoping for the CPU digit to be a 1 or 2, but it doesn’t come as much surprise to see a zero. The zero of course indicating that this is yet another JZ4770 handheld.

The RG280V is available in two colours. Classic famicom red and gold, as well as a black and brushed steel style finish.

We can see that the RG280V is aimed at the same customer base as the LDK. That is, gamers who prioritise portability over polished ergonomics and the luxury of analog sticks. The RG280V has a brushed metal face plate reminiscent of the Famicom controller. Inputs on the front are limited to a d-pad, start, select and ABXY buttons. The top of the device reveals L1/L2/R1/R2 buttons as well as a USB Type C charging port and headphone jack. The shoulder buttons seem to have an unusual configuration, with the R1 and L1 overlapping the back of R2 and L2.

The naming convention indicates that the RG280V has a 2.8″ LCD, possibly the same one as the RG280. Unsurprisingly it runs OpenDingux out of the box, and therefore will support most emulators up to and including the PS1. Other fifth generation machines such as N64 and Sega Saturn won’t be supported.

The RG280V can be seen as an upgrade to the LDK vertical, sharing a similar layout albeit with a slightly more polished looking design. The addition of 2 extra shoulder buttons and a CPU bump from JZ4760B to JZ4770 makes this a bona fide successor to the LDK, and is a good upgrade for those looking for a compact but capable emulation handheld.

Don’t forget, there’s a tiny discount when using the code OBSCURE at whatskogame.