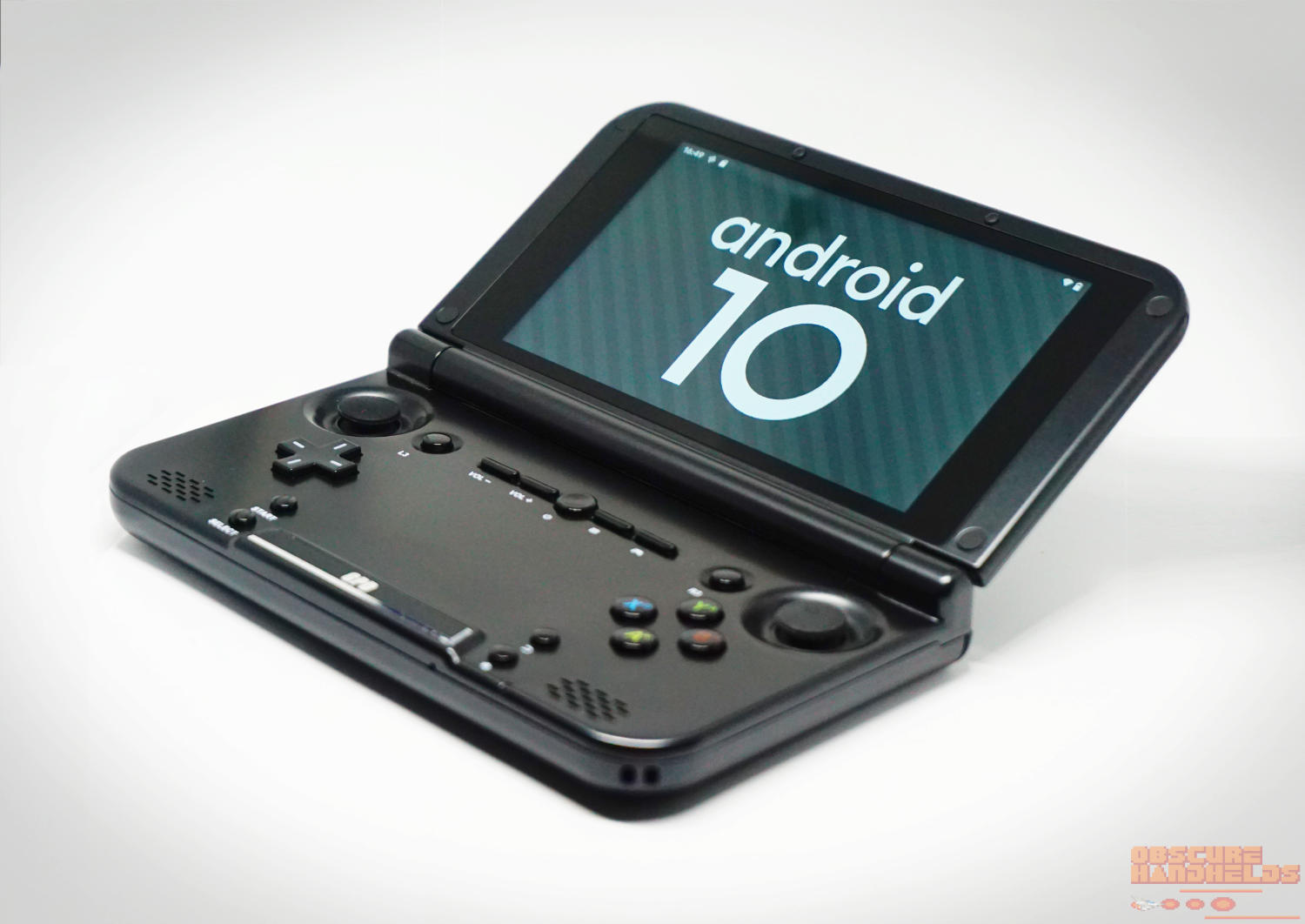 After a lengthy and slightly worrisome stint at the sorting office in Heathrow, my GPD XD Plus finally arrived on a warm morning back in April 2018. I used it on the stock firmware for nearly 3 years before reading an interesting update regarding Android 10. At this point I decided it might be time to revisit the GPD XD Plus.

This is a revisit of an article I wrote back in 2018. I have updated it whilst keeping some of the original content where relevant.

I bought the XD+ way back on February 18th 2018 when Fasttech had their 15% discount for CNY. It came out to $168 shipped, which was about £124 with PayPal’s exchange rate. I picked up the package from the local depot the following April. It took 64 days to arrive, that’s a long time to wait – but it was a pre-order.

The device came in a similar box to 2016’s model, and Fasttech wrapped it in cling film as they seem to do with most expensive electronics. I guess to protect it from any potential disasters involving water! No pictures from inside the box, but it comes with all the usual stuff plus a screen protector which I never fitted. With a clamshell form factor such as this, it’s not really necessary.

When the device is closed it’s very reminiscent of a 3DS XL, which is no bad thing. As noted by others on the dingoonity boards, it seems that the top half of the unit is finished in a very glossy, slightly sparkly paint, whilst the bottom half is simply dark grey. I imagined this would look strange, but it’s barely noticeable. The entire thing is a massive fingerprint magnet though, I had to polish it with a cloth before taking any pictures.

I’d previously written that the build quality of the GPD XD Plus was unsurpassed by any other of the Chinese handheld manufacturers. At the time GPD were setting the standard for build quality with their handhelds. Even compared to their old G5A the build quality was a massive step up. The seams where 2 halves of a case come together are fractions of a millimetre wide, and completely even all the way around. It’s beautifully put together. However, things have come a long way and although the build quality is good, companies like Anbernic have matched or even surpassed this quality of manufacture in 2021.

The device weighs more than I expected, and overall feels almost like the quality you’d expect from something like a 3DS. I say almost, but there are some giveaways. The first thing is the hinge, it’s not Nintendo quality. The screen locks back in 2 positions – the usual playing position, and completely flat. In the 45 degree playing position there is a very slight wobble to the hinge. Once locked at 180 degrees it’s tight. The hinge is very stiff and it’s common knowledge that with the 2018 version of the XD+ the hinges can crack over time. They apparently fixed this with a 2019 version of the same handheld, which contains identical hardware but makes some changes to the hinge and paint job. For what it’s worth, my hinge hasn’t cracked but if I’m honest it’s collected dust for quite a while now.

Once I’d finished drooling over the gapless seams and frowning at the waggly hinge I had a look at the controls. First of all, the analog sticks feel wonderful. With a rubberised finish and a silky frictionless glide they feel exceptionally well made. If I was going to criticise them I’d have to say that in some N64 games it feels as though they need to have more travel. It’s difficult to find the sweet spot between no movement and full movement in games like Ridge Racer and Mario Kart 64. This might be something that can be configured in software though. I should say at this point that the switch like Analog sticks we get on devices such as the RG351P are better than these. More travel, a taller stem, better grip and clickable too unlike the GPD XD Plus ones.

The d-pad is a bit of a concern, it doesn’t really feel like any d-pad I’ve used before. It feels like the central pivot is too broad and shallow . There’s a lot of thumb movement needed to go from one direction to the opposite, and tactile feedback is lacking. It’s not a deal breaker, and other people may disagree – but I’m not keen on it. In recent years other manufacturers have pretty much perfected the d-pad, and those are a lot better than the one found here.

The 4 shoulder buttons are both perfectly placed and perfectly made. They are very light to press and respond with a delightful and positive click once pressed. L2 and R2 sit proud of L1/R1 which makes it super easy to blindly hit any of them. The only improvement would mean a complete redesign to make them analog, but you can’t have it all.

On the back of the device you have a microSD slot (to expand the 32GB on board storage), a microUSB port for charging and data transfer, a Mini HDMI port and a 3.5mm headphone jack.

The face buttons all feel OK too. ABXY are within easy reach and easy to push, but they could do with a bit more tactile feedback. They’re quite mushy feeling. The remaining face buttons require a slightly harder push and respond with a dull click. There is zero rattle to the unit – with all those buttons you might expect a few to move about and make a racket, but they don’t. Overall the design and execution is fantastic in some areas and acceptable in others.

The GPD XD Plus comes with Android 7 pre-installed, and has been given a custom launcher by the GPD devs. I’m not a fan of the launcher, and swapped it out almost straight away.

I was able to uninstall a few of the unnecessary apps that came pre-installed, including the “happy chick” emulator frontend. The built in “Emulator” program is baked in but swapping to another launcher basically hides it.

I never noticed any issues with the UI as far as stability or speed goes on stock firmware. The ROMs that came preinstalled seem to work very well for every system, and my brother installed PUBG which plays great albeit on lowered graphics settings.

Screen on time is very good as well, battery life on full brightness is better than any phone I’ve had in the past. This is to be expected considering the 6000mah battery is about twice the size of most phones. After reading some complaints about the WiFi in the original GPD XD, I also ran the speedtest on both my phone and on the XD+ (sequentially of course). Results are from the 5GHz network in my house, and I have no concerns about the WiFi on the XD+.

The LCD is also very nice. Although only 720p, the colours are very vivid and viewing angles are exceptional in every direction. It’s capacitive with a glass front, and it’s every bit as responsive as you’d expect from a modern day phone. There is no blueish hue to the screen either, which is something I’ve noticed in cheaper panels.

It’s safe to say that GPD did wash their hands of the XD+ eventually. They could have had some engineers working on newer versions of Android for it, but at the time they were focussing their efforts on their new Windows machines. If you consider the hardware, many current Android handhelds are far less powerful than the XD+. Even the forthcoming ones are only a few steps ahead, and the XD+ was released 3 years ago! I can’t help thinking that if GPD had supported the machine for longer, it would still be somewhat in the limelight now. You never know, maybe it would have spurred on the other manufacturers to bring more powerful machines to market sooner. The machine is no slouch, with specs that we still get excited about in new handhelds today.

As is often the way though, the talented dev community stepped in. Black-seraph is the guy, and he has pretty much single handedly brought 8.1, 9 and now Android 10 to the GPD XD Plus. The Android 10 build is still in beta, with issues around Vulkan being broken and HDMI not transmitting audio. If you’re wondering whether or not to bother, gpdcentral put together a very good list of reasons to upgrade.

But be aware that until Vulkan is fixed you will have to use OpenGL. This makes the majority of the already small playable GameCube library, and some PSP titles unplayable in 9 and 10 right now. If you want to upgrade the OS and don’t want to live without Vulkan support, go for 8.1 for now. Black-Seraph operates a patreon for followers wanting the latest builds. CleanROM 2.1.1 (7.1) is freely available, but for 8.1 and above you need to become a patron of his (for now – eventually it will be openly distributed).

The GPD XD+ is available everywhere, and can usually be found for around $230. That was the main problem with this handheld I think, it was too expensive – and still is. Whether or not the XD+ is a good buy in 2021 is up for debate. On one hand, it is dated and will soon be superseded by more powerful Android devices at a lower cost. On the other hand, it’s unlikely those other devices will get the same level of support that the XD+ is enjoying. Black-Seraph is hell bent on fixing the current issues, and will apparently be bringing Android 11 to the device at some point too.

Personally I would probably wait and see how the KT R1 and PowKiddy X18S end up. But, if you’ve got money burning a hole in your pocket then affiliate links are provided below 🙂