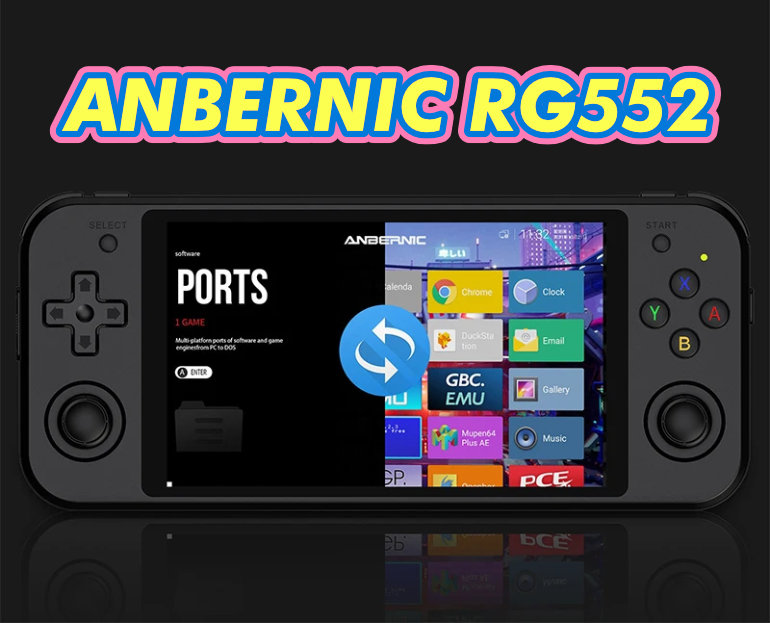 The Anbernic RG552 is part of a wave of more powerful handhelds due to be released in 2021 and beyond. The RG552 takes Anbernic’s well established design aesthetic and adds a larger screen as well as a much needed bump in performance. The Anbernic RG552 is now available, but brace yourself for the price!

The Anbernic RG552 contains a large 5.5″ display, as the naming convention suggests. The chip used here is a RockChip RK3399. It’s a fairly powerful but power hungry hexacore ARM CPU which will smooth out many of the problematic N64, Dreamcast and PSP titles of the RK3326 era.

The LCD is actually a 5.36″ 1920*1152 display with a ratio of 5:3. That’s somewhere between 4:3 and 16:9 in terms of width. It’s an IPS panel and as usual with Anbernic’s new devices, it is OCA laminated. It is also touch screen enabled, which will help with navigation in the stock OS.

Despite the buzz around RockChip’s new RK3566, the RG552 will contain a much older chip known as the RK3399. First announced back in 2016 and released the following year, the RK3399 is actually a more capable chip than the RK3566. Unfortunately it is also more power hungry and runs hotter. See below for a comparison courtesy of gadgetversus.com. This configuration comes with 4GB of LPDDR4 RAM.

It’s been rumoured that a handheld with this chip was first on the cards in 2020, but heat dissipation halted development. This new image shows a grills in the back of the unit for hot air exhaust. This is the first Anbernic device to come with active cooling, a decision deemed necessary based on the heat produced by the RK3399. This addition has probably added to the cost of the RG552 quite significantly, and goes some way to explain the high price of the unit.

This chipset isn’t going to perform any miracles, but it will definitely help cement systems such as N64, Dreamcast and PSP firmly into “works well” territory. It’s possible that a handful of GameCube games may run at an acceptable level on this machine, and who knows, with the release of AetherSX2 there’s a very slim chance that a PS2 title or two may run OK too.

The RG552 runs Android 7.0 out of the box, with the option to boot Batocera from one of the 2 microSD slots. There is a 16GB microSD card supplied with Batocera pre-installed. From what I gather the system will boot directly into Batocera if that SD card is inserted.

It will be interesting to see if Anbernic unlock the bootloader and associated kernel sources for this device. A port of Lineage to the RK3399 would be in everyone’s best interests.

The RG552 houses two 3200mAh cells providing around 6 hours of battery life according to the specs. These can be charged by both QC and PD chargers, one of which is supplied in the box. Make sure you choose the right region to ensure compatibility with your sockets!

The device has onboard WiFi this time (finally), but it looks as though it may not support 5GHz. It has been suggested that this is the WiFi chip that the RG552 ships with (image below). If you lookup the part number BL-M8188FU3 the specs for the chip it is based on (RTL8188FTV ) only list b/g/n and the 2.4GHz frequency.

This throws into doubt how well game streaming might work on the RG552, but we will have to wait for early reviews to find out. Bluetooth isn’t mentioned in the promo material either, and it seems as though that feature is absent from the RG552.

The Anbernic RG552 is available as of the 6th December 2021. It comes in two colour options, the usual matte black and also a light grey with black buttons. Whilst the RG552 release should be quite exciting to the retro gaming community, the price is a little unfortunate. At around $230, the the RG552 is right at the top end of “budget”, and the PowKiddy X18S offers more power at a lower price. But part of that trade off is in reputation.

The X18S has issues with both the OS and controls, and whilst black-seraph is doing a great job porting Lineage to the device, the early adopters of the X18S got something of a shit show out of the box. Anbernic’s quality of manufacture is generally very good, and any issues with the software should also be ironed out in time. $230 is a big ask, especially with budget friendly devices like the RP2+ offering similar performance for a much lower price. And of course, there’s always Odin looming around the corner.

33 thoughts on “What We Know About The Anbernic RG552”