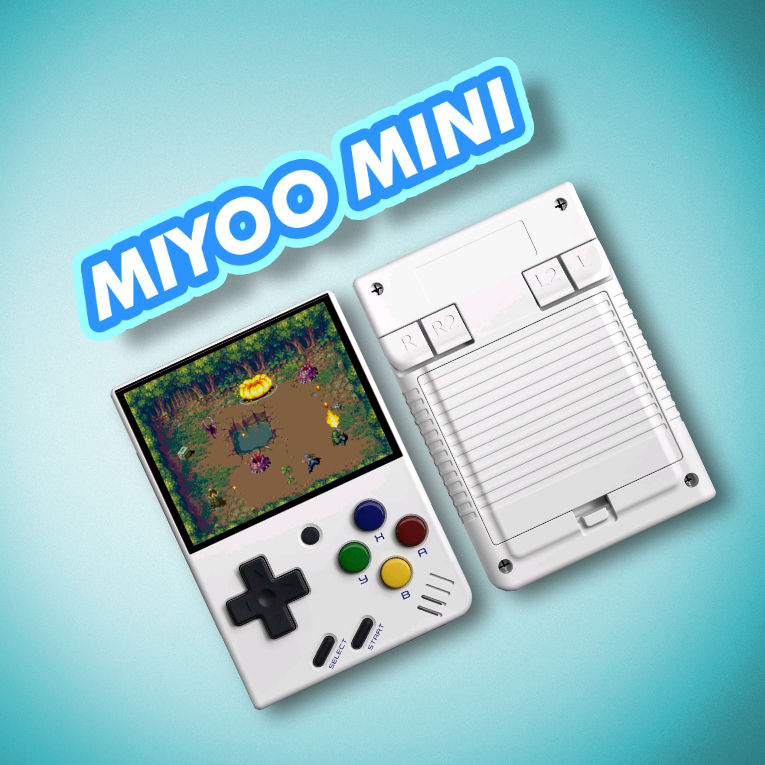 As we know, Miyoo already has one new handheld up its sleeve. But evidently one isn’t enough! Short videos of the tiny Miyoo Mini have been doing the rounds on Baidu for a month or so now. Let’s have a look at this dinky little handheld.

If the P60 is going to be Miyoo’s flagship handheld, then The Miyoo Mini could be its little sidekick. The Miyoo Mini is a portrait oriented device, with a couple of interesting features.

The Miyoo Mini is going to be a budget handheld, with specs to match. Somewhat interestingly, the chip powering the Miyoo Mini is making its debut in this field. The Sigmastar SSD202D is a dual core Cortex-A7 processor running at 1.2GHz, paired with 128MB (probably) of DDR3 RAM. To my knowledge we’ve never seen a Sigmastar SoC in any handheld before. Whilst this one isn’t going to blow anyone’s mind it is a slightly intriguing choice, given that there is a current effort to bring these obscure Sigmastar chips to mainline Linux.

Looking at these these specs we know that the Miyoo Mini won’t be a flagship handheld. The SSD202D doesn’t have a GPU, so systems that depend on one such as PSP, Dreamcast and N64 are unlikely to be possible here. PS1 is probably going to be its limit, and that might be touch and go for certain games too.

It looks as though the Miyoo Mini will come in at least two colours, white and DMG beige.

Although the specs are far from ground breaking, one of the Miyoo Mini’s nicer features is the LCD screen. On such a tiny little machine it’s very nice to see that the LCD is occupying so much of the upper half real estate.

The 2.8″ LCD is surrounded by very narrow bezels which almost touch the edges of the shell. And despite its small size, that screen is supposedly going to be a 640*480 panel too. Although 2.8″ is in the “too small” territory for many, it gives you some idea on the overall size of the handheld. It’s really small, and will be very portable.

The Miyoo Mini’s other standout feature is the stock OS. I was initially told that the Mini will dual boot an OS “like the S30” with Retroarch. From the leaked videos so far, we can see for sure that Retroarch is running on this machine. It looks as though the menu button takes you directly from game into the Retroarch settings. So not quite dual boot, but I get what they meant.

On the back of the unit we can see R1/R2 and L1/L2 triggers. They’re placed at a roughly 45 degree angle and to be honest they look like they could be quite serviceable. L2/R2 look to be raised slightly further from the shell than L1/R1 which should make them easier to hit. The unit is powered by an 1820mAh Samsung branded battery, accessible and replaceable through the compartment on the back.

Below is a selection of photos sent to me showing off a white prototype unit. We can see that it’s charged via USB-C, and that there’s a microSD port and 3.5mm headphone jack on the bottom of the unit too. The left side houses the volume wheel and the stock UI has an option to boot into RetroArch.

The Bittboy and Pocket Go line of handhelds were (mostly?) all manufactured by Miyoo. The BittBoy and Pocket Go monikers were used for the western market, but in this case (and that of the P60) neither of those names are going to be attached to this product. Either the BittBoy/Pocket Go team have moved on, or Miyoo have decided they want to go it alone. Either way it should be known that Miyoo have a patchy track record of delivering products with a high quality of manufacture. Their previous device though, the Pocket Go S30, is probably the best quality product they have made yet.

It’s also worth noting that Miyoo do appear to be listening to their customers. I made a poll regarding Android and dual boot before their S30 was released, and the overall consensus was in favour of both. I do know that they saw the results of that poll, and for what it’s worth they are releasing an Android device and the Miyoo Mini looks to be a dual boot machine. Kudos to them for that.

The below is a collection of all available clips found on Baidu and Bilibili compiled into one youtube video. The video is not monetised.

The Miyoo Mini is now available to order from the official Miyoo store on AliExpress for $52.