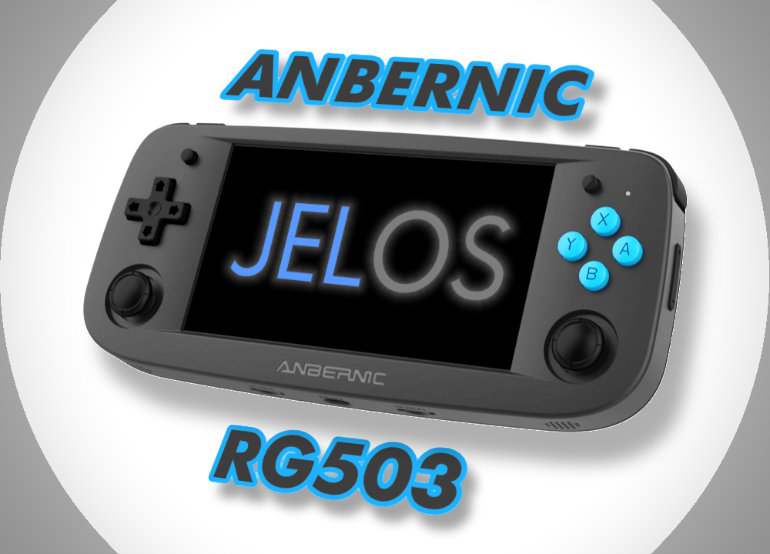 The Anbernic RG503 has made its debut and is now available to purchase. The RG503 looks to be a low to mid tier device with a couple of nice features, and a couple of apparent oversights too.

The RG503 is a definite move away from the aesthetic we’re used to from Anbernic. Gone is the smooth cornered rectangular look, instead opting for a shell reminiscent of another handheld from yesteryear. The recessed display and curved ridge lines remind me of the PAP KIII Plus, which was also an Anbernic product (before they were known as Anbernic).

Front and centre of the Anbernic RG503 is probably its nicest feature, a 5″ 960*544 resolution OLED panel. Ring any bells? Yep, it’s totally possible that it’s the same panel as found in the PS Vita PCH-1000 model. Those screens are plentiful and cheap so it would make sense to use them. More so given how much nostalgia people have for the bright and vibrant OLED panel in that early Vita model.

Under the hood is another surprise by way of the SoC. The RockChip RK3566 is relatively new and contains a quad core A55 chip running at up to 2GHz. Released in 2020 as a mid tier SoC, it is likely very cheap and in good supply by now. It’s the first time we see the RK3566 in any handheld device, although it has been seen in a few Android TV boxes already. It isn’t going to push any boundaries, sitting somewhere between the RK3326 (too many to list) and RK3399 (RG552) in performance. For some idea, take a look at the benchmarks page here.

These renders of the top and bottom of the device show all the usual IO, including dual MicroSD slots and USB-C for charging and OTG. There’s also a HDMI output this time, something that wasn’t supported on RK3326 devices.

Early reports suggested that the RG503 would dual boot Android 11 and Anbernic’s own EmuELEC build. But Steve’s new video on the Tech Toy Tinker Company channel shows his dev unit with only 1GB of RAM. It may be possible to run Android on that spec, but it’s really pushing it. Those RK3566 TV boxes usually come with 8GB, and whilst that might be overkill, 1GB is paltry. Also Steve’s video makes no mention of Android as one of the supplied OS. He does mention JELOS as the OS he and developer fewtarius are working on bringing to the device. JELOS is already supported on a few of Anbernic’s other handhelds and shows promise as the new standard in future.

Update 25APR2022: As predicted, the RG503 does not run Android. Instead it runs Anbernic’s own EmuELEC Batocera fork.

The Anbernic RG503 will apparently also come with 5GHz WiFi and Bluetooth 4.2 onboard, as advertised in this short (unofficial?) promo clip.

The RG503 is now available at most good retailers and the price is right around the $150 mark as we thought it would be. It’s available in black, blue and grey plastic. It’s a difficult one to get excited about, especially considering the existance of the Retroid Pocket 2+ which is a far more powerful machine at a very reasonable $100. But that big and beautiful OLED panel is going to turn some heads, and Anbernic’s build quality and community support will definitely help drive sales.