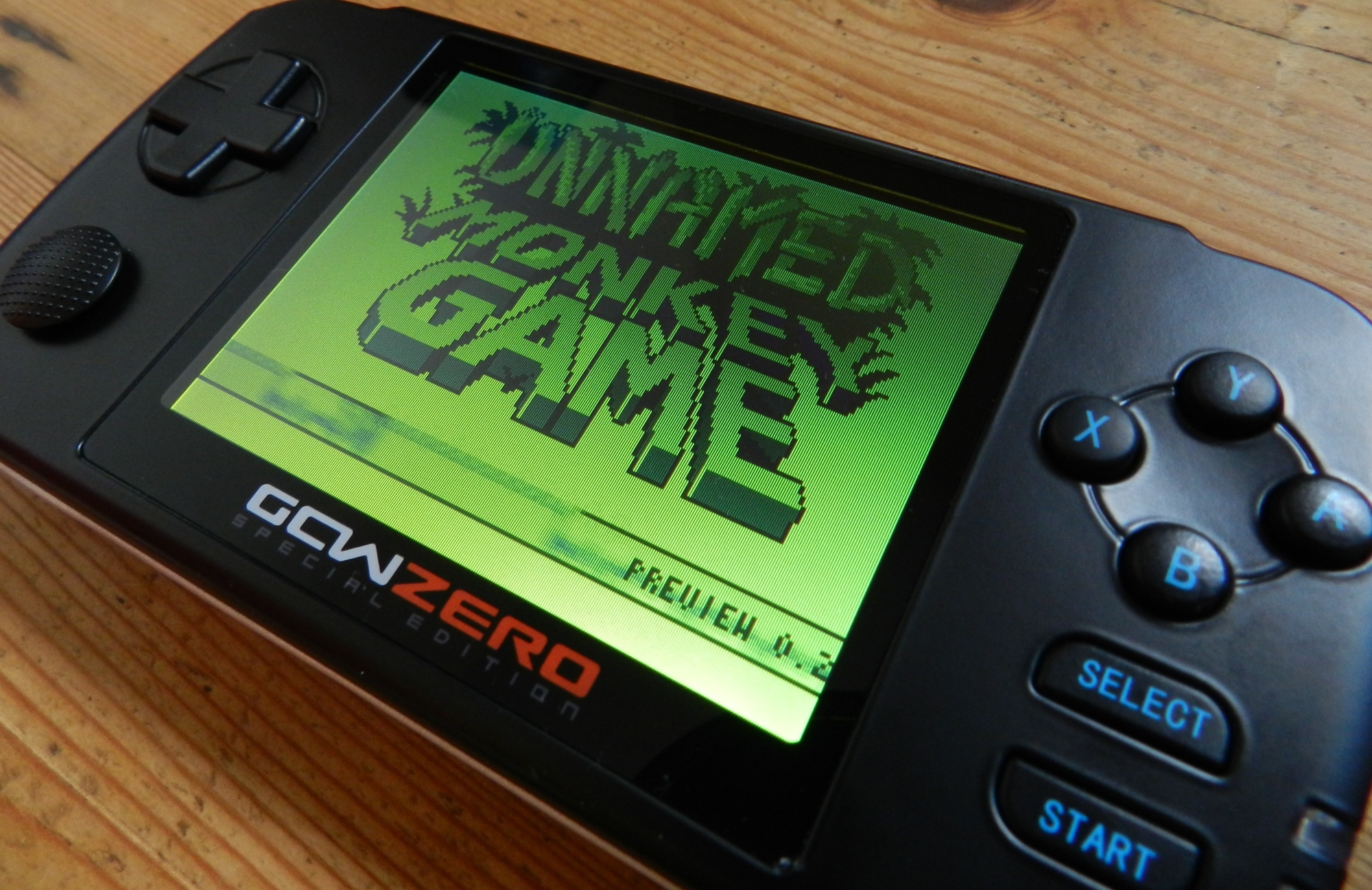 Yep you read it right, today my GCW Zero SE arrived. I could scarcely believe my eyes when my brother emailed to say I’d received a parcel from America, but it’s here. Believe it.

It’s been just over a year since I made the first payment towards this little bundle of joy, and about 8-9 months since it was supposed to have been delivered. As with so many amateur run projects like this, the device was plagued by delays, missed deadlines and poor communication. But the saga is coming to an end for almost everyone now, and today Justin can tick one more eager pre-orderer from his list as my GCW Zero has safely landed in my hands.

Whilst I haven’t had nearly enough time to do a review, I thought some of you might be interested to see some close up pics and maybe even read some first impression opinions. So without further ado, let’s have a look.

The parcel arrived in a bubble wrap envelope. One end was soft and I wondered if the promised t-shirt might be stuffed into one end. The package was quite weighty and I wondered whether those laser etched tumblers could be in there as well. No tumblers, but I was right about the shirt. The shirt is a Gildan Heavy Cotton, and though I’ll perhaps never wear it it’s nice to see that they chose a high quality fabric. Size XL for the “larger gentleman” 😛

The other end of the envelope of course contained the boxed up Zero. They used some heavy duty cardboard for this thing, very rigid and more than suitable to protect the contents. Unfortunately the printing on it is not great. It’s supposed to be black I guess, but it’s more like a very washed out grey colour. The image of the console barely stands out from the background, but of course I’m nit picking here. The back of the box contains a nice little introduction to the machine, and on the left side you’ll find a list of specifications. Once the lid is popped the first thing you see is the console itself, safely wrapped inside a plastic bag. Underneath the white card tray are all of the accessories that come with the SE version. I’m not sure if the same bits and pieces will come with the Kickstarter editions or not, but the SE customers are certainly taken care of here. The unit comes with two layers of screen protection. We’re told that the plastic underneath is very scratch resistant, and I plan on taking great care of it anyway- so off they come. The unit itself leaves me with mixed feelings. On the one hand it weighs perfectly in the hands, it has a very reassuring weight to it. It’s obviously been put together very well too, there’s very little creaking or flex when gripped and twisted and that blue print on the buttons looks very nice with the orange in the logo. But the quality of the plastic moulding is not great. There is a noticeable and irregular lip along the edges where the casing meets the buttons. It’s possible that the lip was done on purpose, but it’s just not quite done well enough to warrant the almost premium price tag. There is also a strange granular texture to the plastic. It’s not quite matte and not quite gloss, it’s somewhere in between and it looks cheap. Some of the buttons don’t quite sit flush to the case either, but this may even itself out with time. Compared to its Father, the Dingoo A320, the GCW Zero is quite a bit bigger. This will suit most people as the A320 was far too small for most adult hands. Of course, the shoulder buttons are way better on the Zero as well. They’re similar to those of the Gemei A330 but not nearly as mushy. The screen resolutions are the same on both machines, but the Dingoo screen was 2.8 inches whilst the Zero’s screen is a perfect 3.5. If only it were 640×480, ho hum. Some people have mentioned a problem with the dpad down. I can confirm that the problem exists on my unit as well, sometimes requiring 2 or 3 presses before it registers. I am told that with some use this will probably sort itself out, I’ll have to wait and see.

OpenDingux looks pretty much the same as it did on the Dingoo A320 at the moment. Obviously it’s in beta stage and will likely remain that way for most of its life, but it will be constantly updated and fixed by the developers as time goes on. At the moment it’s functional but it doesn’t look pretty and does crash once in a while. The buttons in general feel good. The analog stick is smooth and easy to grip, the shoulder buttons are an improvement over the ones used in the Gemei A330 (a device with a very similar case mould to this) and the ABXY buttons have a very pronounced click as you depress them. Aside from the dpad down issue it does feel OK, though I would prefer a higher pivot so that there is more travel when pushed in each direction. The device itself looks decidedly 90s to me, I prefer the clean lines of the Dingoo A320 by a long way – but it’s just a personal preference and I’ll bet most people would disagree there. There are some games pre-installed, including a preview of Unnamed Monkey Game by zear and Harteex. The GCW Zero is a long way off reaching its full potential. Currently there are many features not working, including (but not limited to) HDMI output, GPU acceleration and WIFI (WIFI was my mistake, I was configuring it incorrectly – it works), but the device has only just been born. Part of the fun will be watching it evolve and grow as developers figure out ways to push the device to its limits. This isn’t going to be a toy for someone that wants instant gratification, it’ll be something that improves slowly with age. Despite the fact I’m not overly impressed with the fit and finish of the product – I’m very excited to see what lies ahead for it.

Has anyone else received theirs yet, and if so what are your first impressions?