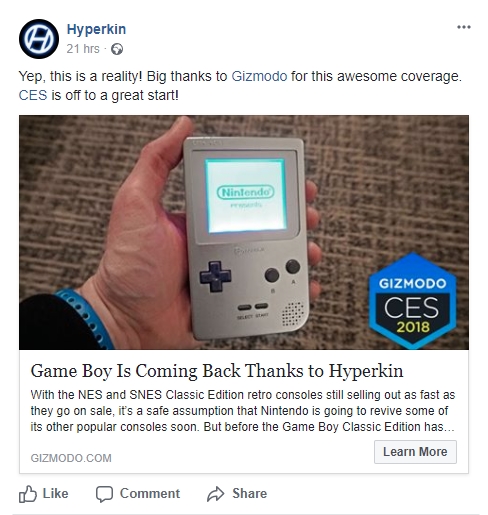 Hyperkin have apparently developed a Game Boy Pocket clone and will be releasing it in Summer this year. The unit will be clad in an aluminium shell and will of course house a backlit display. The final product will have a dial that allows you to cycle through the entire colour spectrum to find your backlight colour of choice, and a switch to allow you to turn it off entirely. There’s no built in memory so you’re gona need your own carts to play on this thing, and as yet there’s no word as to whether the Everdrive carts from Krikkz will run on it or not.

Hyperkin have been around a while and are known for releasing clone consoles of varying quality. There’s a chance they’ll nail it, but even if they do it’s a fairly straight forward process to stick a backlight in an original Game Boy Pocket. The aluminium shell is a nice idea in theory, but it’ll be far more prone to getting dinged so I’m not sure if that’s a good idea or not in reality.

Other improvements over the original are stereo speakers and a proper stereo output, which may appeal to chiptune artists… but only if the hardware is capable of authentically reproducing the sound of the original. It will also house a built in rechargeable battery and USB-C charge port. The pre-release name for this thing is the Ultra Game Boy.

It seems a strange move for Hyperkin, and I can’t imagine Nintendo are gona be too happy about it either. The unit is going to cost about $100, and for that price you can easily buy an original unit, replacement shell, backlight and bivert chip and make your own. There’s also the fact that the GB Boy Color already exists, and has a full colour screen on it. They can be had for about £30 or less, though the aspect ratio is off and the hardware isn’t great.

The unit isn’t on their site yet, and if Nintendo don’t shut it down before it appears I’ll keep my eye out for it in the coming months.