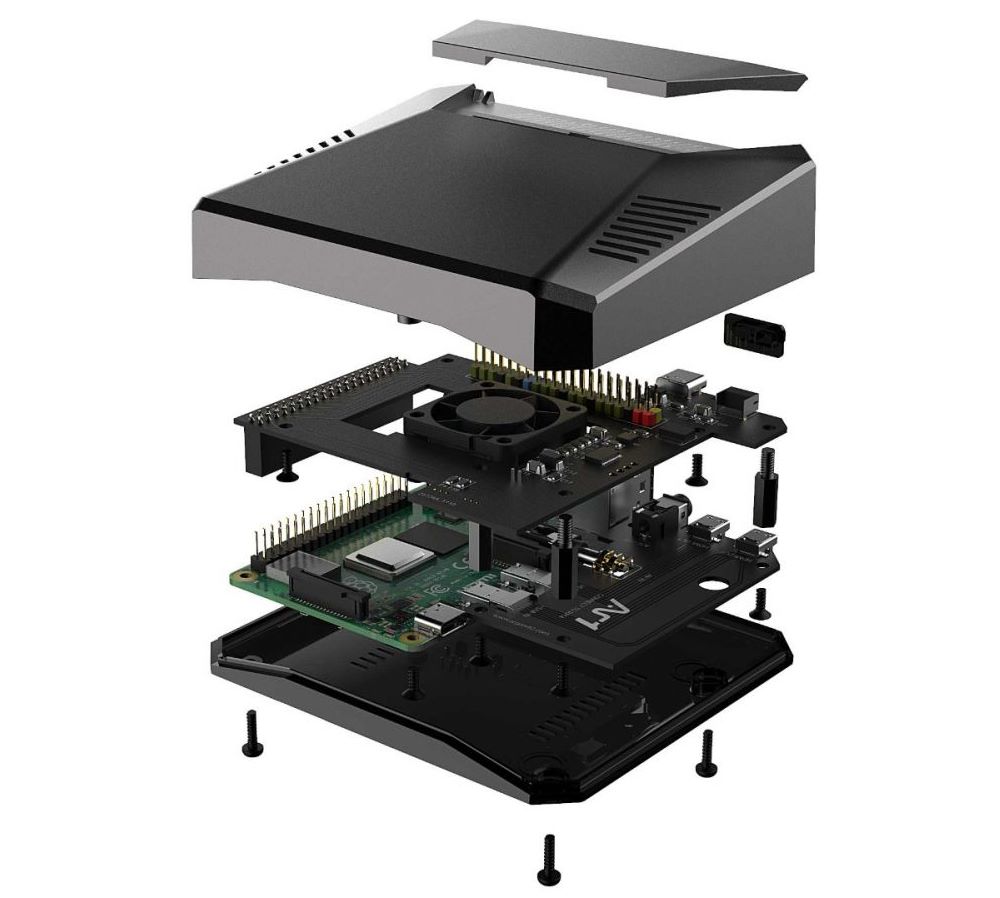 The highly anticipated release of RetroPie for the RPi4 was the excuse I needed to grab a RPi4, as well as a nice case to house it in. After hunting around I eventually settled on the Argon One RPi4 case. It’s a very reasonably priced aluminium alloy case with both active and passive cooling, and some other clever tricks up its sleeve.

The Argon One allows for better cable management than most cases by re-routing HDMI, Power and AV to the back. This means that you can sit the Pi on a TV table for example, and all cables run out the back, out of sight. This is partially achieved with the use of a daughterboard which connects to the RPi4 as below.

The USB-C and Power button are not on this daughterboard. Instead they’re mounted to a pre-installed board which also contains the fan and GPIO connector.

Before placing the assembly into the case be sure to add the supplied heat sink pads to the two raised columns inside the case. These make contact with the CPU and RAM and provide passive cooling for your RPi4.

Placing the Pi and connected board into the case requires making sure that the GPIO pins are lined up perfectly. It’s a very tight fit even when everything is lined up. The cut out for the Ethernet port could do with being a hair wider, but it does all fit snugly if you take your time.

But what about the GPIO header I hear you ask? Well, it’s still accessible underneath a magnetic cover on the back of the unit.

The bottom of the case is made of smokey grey plastic rather than aluminium alloy, and the microSD card is still accessible via a cut out in the bottom of the shell. Once fully assembled it’s a very neat and tidy looking thing.

You’ll notice a power button on the back of the shell too. Argon40 provide a link to a script which when installed allows full configuration of the power button and fan. By default, the unit will shutdown safely via a 3 second press of the power button. Five seconds will force it to shutdown if it’s become unresponsive. If you’re interested, the script can be found here.

The fan is pre-configured to run at varying speeds at 55, 60 and 65 degrees Celsius. You can also configure these thresholds yourself in the terminal. Unfortunately, in RetroPie I can’t get the fan to switch on at all. The power button behaves like it’s supposed to, but even setting the fan to ‘Always On’ fails to initialise it. I’ve contacted Argon40 about this issue and they’ve been prompt in getting back to me. They’ve said they’ll test it and will hopefully provide a revised script sometime soon. The fan runs as expected in Raspbian so it’s not a hardware fault, more likely something to do with the way RetroPie is configured.

I did read online that because the case is metal, it prevents the WiFi from working. Although I was planning to use an ethernet cable with it, I have tested the WiFi and it works fine. I get a full WiFi signal, however the Pi is in the same room as my router. Bluetooth controllers also work as expected.

I spent a long while looking at cases for the RPi4 before settling on the Argon One. I very nearly ended up going down the Geekworm rabbit hole. Geekworm make a range of cases and add-on boards for the Raspberry Pi such as SATA controllers and power management boards. Whilst I’d enjoy messing around with all that, they’re pretty expensive and not really necessary in this instance. Eventually I’ll build a NAS using a Raspberry Pi, and maybe I’ll re-visit Geekworm when that time comes.

Overall the Argon One is a very well thought out and executed case. The assembly instructions are easy to follow and even the relevant script installation commands are included.

I hope that Argon40 fix the script so that it works in RetroPie, but until then I’ll be happily using it anyway. The Argon One case is available at the below retailers, if you’re interested.

6 thoughts on “The Argon One RPi4 Case”