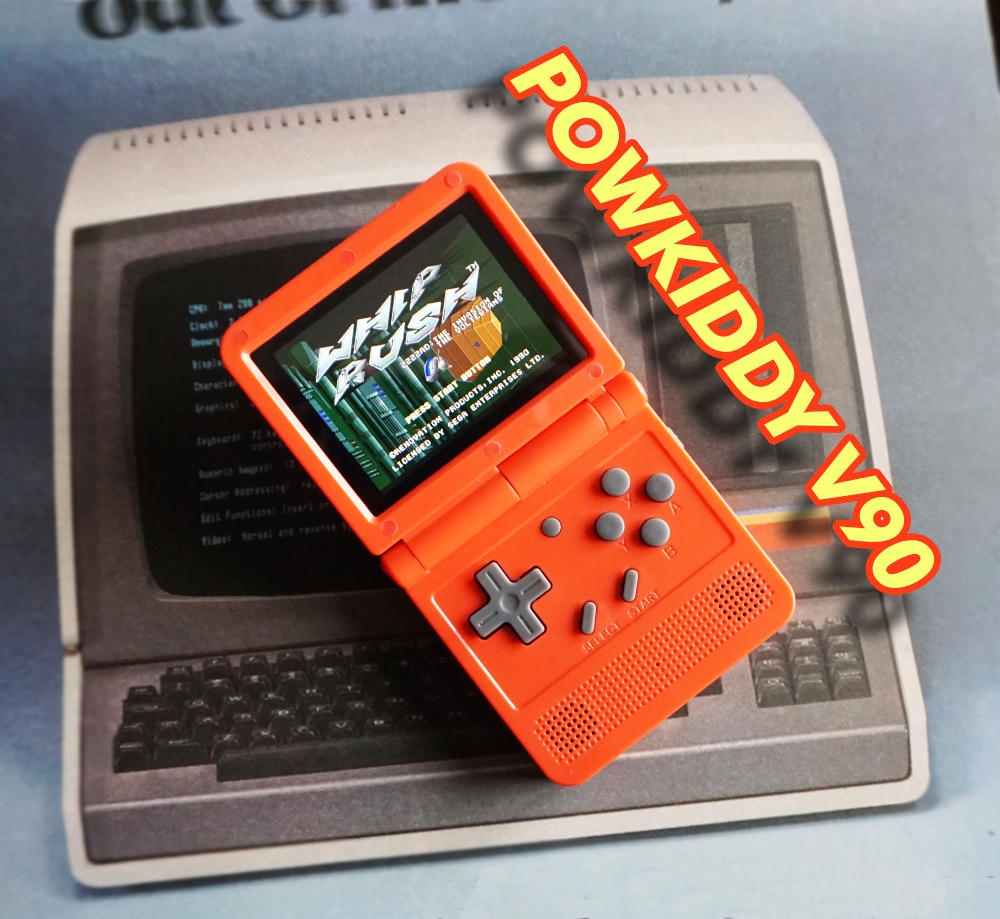 The PowKiddy V90 quietly appeared on AliExpress a few weeks ago now. Styled after the GBA SP, this little clamshell handheld piqued some interest due in part to its smart looking design and low price. Read on for the PowKiddy V90 review.

The V90 shares the same hardware as the following handhelds:

It contains a low power ARM chip from AllWinner and it runs a closed source Linux based OS called NxHope. NxHope is designed to look like the RetroFW firmware for JZ4770 machines, but the likeness is only skin deep. The amount of community involvement for this OS low, because source code is not available. It’s more or a less a “you get what you’re given” type deal, with a couple of small caveats. All of the handhelds built on this combination of hardware and software have shared one flaw – screen tearing. It’s true that the screen tearing was largely remedied on the PocketGo V1 with some custom firmware hacks, but from the factory it’s fairly obvious.

It’s been 6 months since the previous iteration of this hardware came out, so the engineers have had plenty of time to fix the screen tearing issues. But of course, nothing has been fixed for the PowKiddy V90. The screen tearing is still there. Thankfully the custom firmware from the PGv1 works on the V90 and does a great job of minimising the tearing. It’s not a complete fix, but it’s good enough.

The d-pad on the V90 is not great. There’s no pivot to speak of and it’s kind of mushy feeling. The rest of the buttons are fine, even the small and cramped shoulder buttons on the back of the unit are easy enough to reach and press. I’m not sure why they included L2/R2 given the consoles that the V90 emulates.

The PowKiddy V90 contains a 3″ 320×240 IPS display. You’ve seen LCDs like it before and it’s pretty nice to look at considering its low resolution. Outside in bright daylight it’s a little hard to see, but inside it’s fine.

I’m a fan of clamshell devices, so having seen the renders of the V90 I was excited to get it. Unfortunately in the flesh the V90 doesn’t look much like the renders. It’s made of cheap, thin plastic and is very light. It weighs about 115g, which compared to a GBA SP is around 40 grams lighter. It is a little smaller than an SP, they’re not using a knock off GBA SP shell, but the difference in weight is really apparent.

The unit is charged via USB-C and the battery is a Nokia BL-5C clone. Word has it that the Patona branded clones of these cells are pretty good, and they’re readily available at Amazon. Battery life isn’t amazing, around 3 hours is what I’ve gotten with the stock cell.

The hinge is tighter than the one on my original GBA SP (which could be related to age). It’s possible to adjust the screen to any angle you wish, and it will pretty much stay in place. It doesn’t go all the way back to 180 degrees, but pretty close. There’s a nice click once you reach the extent of its movement.

There’s a good reason the PowKiddy V90 feels a bit cheap though, and that’s because it is. It’s not fair to completely slate the thing, because it’s been built down to a price that most people can afford. And whilst it’s not what you might call powerful, it’s got enough juice to satisfy the demands of most fourth generation console emulators.

You can’t expect to play games such as Yoshi’s Island on this thing (8 frames per second), but a large portion of SNES games will work OK. Some games require a bit of tweaking, for example F-Zero is a slideshow until you drop the audio quality – then it’s playable. Mega Drive and GBA fair way better, and mostly everything before those machines works great too.

The V90 does advertise PS1 emulation, and to be fair to this chip does seem to handle PS1 fairly well. I would say performance is on a par with or in some cases better than the JB4760B (LDK/RS97/RG300 etc). Don’t expect performance anywhere near as good as the RG350 or any other JZ4770 handhelds.

All of the emulators are ported from open source, and the button below the LCD opens up the menu. Unlike the Q400, it’s easy to change scaling method and aspect ratio for each emulator, as well as access the save and load states.

The V90 comes pre-loaded with a bunch of other games such as Quake, Doom, OpenTyrian, Cave Story etc. There’s plenty pre-loaded on here to keep anyone entertained.

SHOULD YOU BUY THE POWKIDDY V90?

To be honest I when I first took this thing out of the box I wanted to hate it, but I’ve warmed to it over time. Yes it’s made of cheap plastic, and they still haven’t managed to fix the screen tearing. But it’s kind of won me over in some other ways. I love clam shell designs, and the V90 is small enough and cheap enough that you can stick it in your pocket without worrying too much. The NxHope firmware comes preloaded with loads of different themes, and the UI itself is really nice and simple to use.

In many ways, this would make an ideal handheld for a younger kid. The screen’s protected when not in use, so there’s less chance of breaking it when not in use. There’s nothing to really mess up in OS, and yet it does offer enough options (frameskip, aspect ratio, saves etc) to satisfy most. It’s small and lightweight and it’s pretty cheap too. If you’re considering a clam shell device, you could do far worse. Just be aware that the build quality of the V90 isn’t up to that of the RG350, and performance of some emulators can be a bit lacklustre.