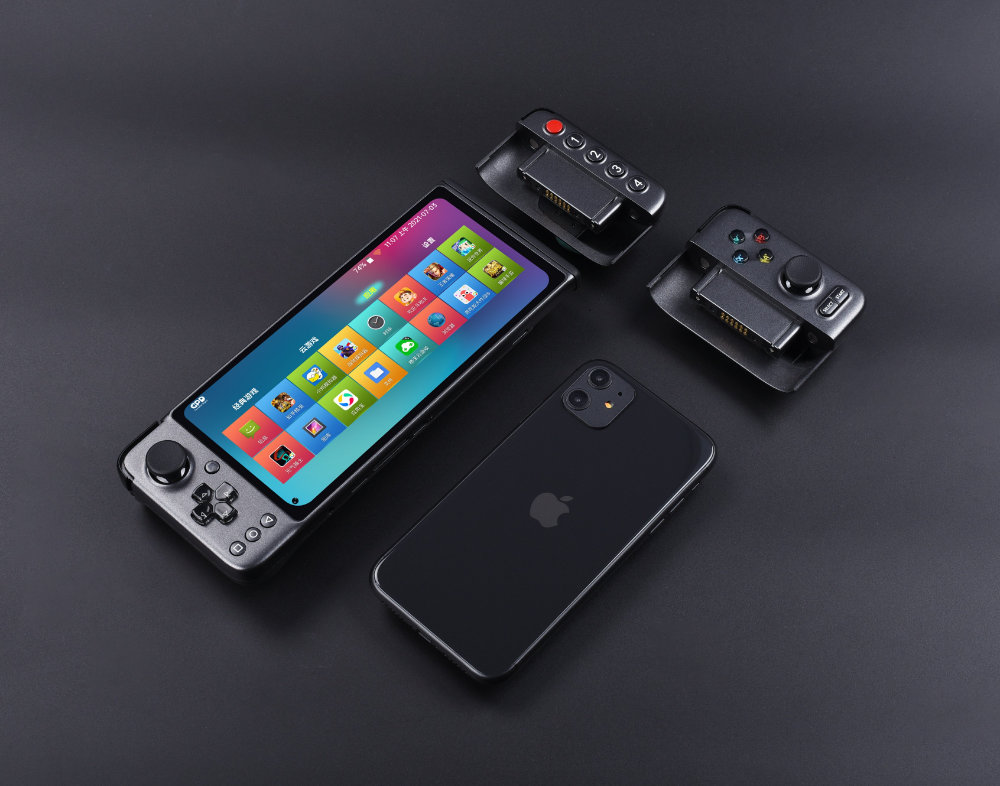 The successor to GPD’s XD Plus has been a long time in the making. For a while there it seemed GPD had moved on to new pastures with their Windows based mini laptops and gaming devices. But here we are, the handheld once rumoured to be the XD2 has been officially announced, and will be known as the GPD XP.

The GPD XP’s most novel feature is perhaps the modularity of the controller. As rumoured last year, the controller on the right hand side is detachable, and the reason for this seems to be for better support of MOBA style games. MOBAs are apparently often played using the touchscreen on the right side for camera controls. The modular slimline controller allows easy reach to the screen, as well as providing five additional action buttons. Alternatively, a blanking plate allows full use of the right side of the screen including any on screen buttons. Thank you to The Phawx for the explanation, I am old and haven’t a clue.

Of course, the GPD XP also has a conventional controller option, providing an additional analog stick, ABXY and start/select buttons. For Android gaming, the built in mapping software allows you to configure the physical controls to replicate inputs ordinarily done by touch. This mechanism for configuring physical controls for Android is well established already, and GPD implemented similar software into their GPD XD and G5A.

At first glance, the GPD XP looks a lot like a mobile phone slotted into a snug fitting controller. The superfluous hole punch front facing camera certainly adds to that aesthetic, as does that crazy wide LCD. We know that the LCD is 6.81″, and looking at some phones with the same size screen it seems likely to be a 20:9 aspect ratio. Not all games machines make good emulation machines, and we already know that Android MOBA gamers are one of the target demographics for this handheld. For games such as those, having a wider screen is perhaps very beneficial, allowing a wider view of the action around you.

For emulation though, 20:9 is a really unfortunate choice. In traditional 4:3 aspect games, only 60% of the LCD would be used. This would leave 20% blanked out on the right and left side of the image. Even the few emulated systems with a 16:9 mode (PSP and some GameCube for example) would need black bars to display correctly.

Given that, it looks as though the GPD XP isn’t really designed with emulation in mind. Rather for native Android gaming and in particular FPS and MOBA type games. It’s a shame, even a 16:9 screen could have helped to bridge the disparity between these two gaming worlds. However, if you’re part of the target demographic then this form factor is probably quite enticing.

The GPD XP is due to run on the MediaTek Helio G95 SoC. This is an octacore processor and is far more powerful than the RK3326 found in the majority of current handhelds. Equipped with 6GB of RAM and a 7000mAh battery, the GPD XP can apparently run for up to 12 hours. It is worth noting that this CPU is probably not as powerful as those due in the KT-R1 and Odin. Whether either of those ever see the light of day is another matter!

Some more roughly translated specs, including the apparent inclusion of active cooling in the image below.

And in table form if you prefer.

The GPD XP is now available through AliExpress for a blistering $369. There’s a lot of competition in this higher end market right now, and the fact they skipped IndieGoGo this time perhaps speaks to their lack of confidence in the XP selling well.

Whilst there’s little doubt that the GPD XP is a high end product from a well established and trustworthy manufacturer, the lack of a high end SoC to match really lets this product down. Sure, it’s a pretty powerful gaming handheld – but there are more powerful ones on the way for less.

For what it’s worth, the GPD XP is much cheaper at Banggood than it is from the GPD AliExpress store. Depending on the device’s success I would expect the price to drop further in the coming weeks.

9 thoughts on “Who Is The GPD XP Really For?”